The Chairman of the Investigative Committee of Russia holds briefing on issue of incidents with children
21 September 2021
17:54
4
print version

Before starting the discussion, the officers of the Investigative Committee observed a minute of silence in memory of the victims of the shooting in Perm.

Turning to the main topic of the meeting, Alexander Ivanovich Bastrykin noted that summer is a vacation time, when children must rest, gain strength before the upcoming school year, travel, expand their horizons. But this period is often overshadowed by accidents leading to injuries, wounds, and sometimes deaths

The Chairman of the Investigative Committee of Russia stated that in June-August 2021, 1,053 children died. Among the main reasons are water accidents and fires

In general, during this time, based on the results of organized inspections of reports of crimes and other emergencies affecting children, 3 thousand criminal cases were initiated

Within the framework of the meeting the management of the Republics of Bashkortostan and North Ossetia (Alania), Irkutsk, Samara, Nizhny Novgorod, Moscow, Ivanovo and Kemerovo regions, Krasnoyarsk Territory and the Republic of Khakassia presented reports on the investigation of several criminal cases of the analyzed category. The Chairman of the Investigative Committee of Russia inquired about the investigative actions carried out, the conclusions of forensic examinations and the timing of the preliminary investigation. Chernyatiev D.N., Ustov V.Kh., Sitnikov A.V., Galikhanov M.F., Starikov A.Yu., Samodaikin V.V., Zyubanov A.G., Kanonerov D.G., Bezukladnikova A .S. are to provide detailed reports on the results of the investigation of criminal cases

The head of the Committee pointed out the need to ensure an immediate response to reports about injured minors, prompt and high-quality investigation of incidents with children, including the establishment of the circumstances that contributed to them, as well as the role of officials whose actions or inaction resulted in accidents or crimes against minors. Speaking about organizing and ensuring the safety of children's recreation in the summer, he noted a significant number of accidents in private children's camps. In this regard, Alexander Ivanovich Bastrykin instructed to continue to carry out preventive measures together with other law enforcement and regulatory bodies and to provide social support to victims, children from low-income families, children with disabilities. 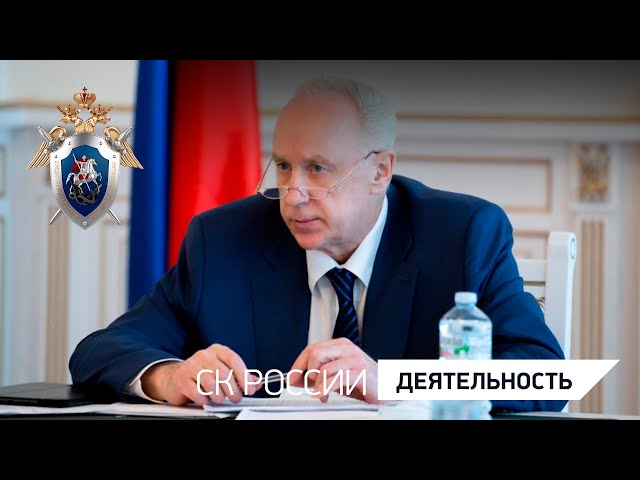