Moscow
The Chairman of the Investigative Committee of Russia holds a reception of students of the Alexander Nevsky Cadet Corps
30 September 2021
17:59
8
print version

Orphans and children left without parental care are always in the area of increased attention of the Investigative Committee of Russia. This is a special category of children who grow up early because of their life circumstances. Despite this, they really need the support of people who are authoritative for them, and it is very important that really wise, experienced and caring people become their mentors.

In total, 80 orphans are educated in the Alexander Nevsky Cadet Corps of the Russian IC, 32 of them have been enrolled this year. At the beginning of the event, Alexander Ivanovich Bastrykin congratulated the children on the start of the new academic year and wished them success in their studies, sports and friendship. He paid special attention to the young people who just joined the ranks of the cadets. The head of the Committee drew their attention to the fact that their diligence and hard work would become their reliable helpers in obtaining knowledge and professional development.

“I would like you to understand as soon as possible what the “cadet brotherhood” is. It is not necessary that you later become investigators, this is a difficult profession, because we face human misfortune every day. Grief is hard to observe, but it is also morally difficult to investigate a crime and why it happened, especially against children, veterans, disabled people. But we have created cadet corps so that you understand your vocation as soon as possible, realize your strengths and choose a professional direction”, A.I. Bastrykin noted. He reminded the cadets that each of them in the future can become an employee of the Investigative Committee of Russia and bear the proud title of an officer ensuring law and order in their country.

Igor Vladimirovich Zaporozhan outlined the successes of the students of the cadet corps and noted that all the cadets study diligently and try to master the material.

For their part, the cadets performed several musical numbers, and also read poems about friendship, love for the Motherland and mutual assistance.

The Chairman of the Investigative Committee of Russia presented Igor Vladimirovich Zaporozhan with a letter of gratitude for the active participation of cadets in the volunteer movement, in patriotic, cultural and sports events.

At the end of the event, the cadets presented A.I. Bastrykin a book about the veterans of the Great Patriotic War of the Kuzminki district, in which their Cadet Corps is located. 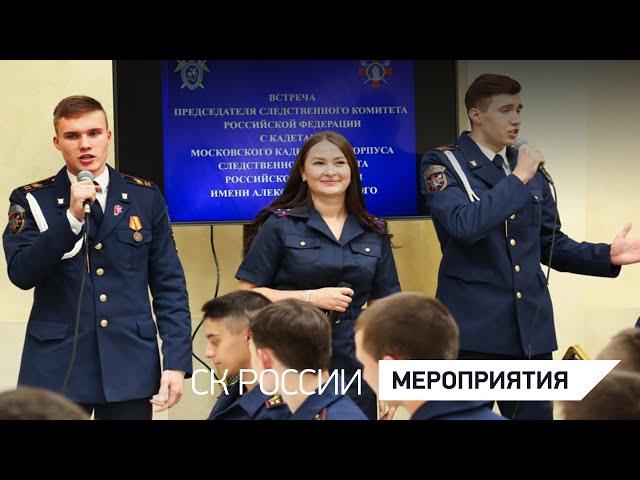