Leningrad Region
Working visit of the Chairman of the Investigative Committee of Russia to the Leningrad region
12 November 2021
20:54
26
print version

The Chairman of the Russian Investigative Committee Alexander Ivanovich Bastrykin has arrived on a working visit to the village of Kokkorevo, Vsevolozhsky District, Leningrad Region, host of the Road of Life memorial museum. The Chairman, together with the Investigative Committee delegation, as well as veterans and local residents, laid flowers at The Broken Ring monument, part of the Green Belt of Glory of Leningrad memorial complex, located on the shore of Lake Ladoga, honouring the memory of defenders of the Siege of Leningrad and those who died during the Great Patriotic War.

The museum inspection was followed by a meeting of the Chairman with veterans and residents of the Rahja rural settlement, which includes the village of Kokkorevo and other settlements. "Created by direct participants in the events of the war years, the museum is of special value not only to local residents, but also to all our people who cherish the memory of the Great Patriotic War," A.I. Bastrykin said, addressing the audience. "This is one of the few folk museums in our country created by veterans and local residents, and filled not with inanimate stands, but with genuine exhibits preserving the memory of the Leningrad blockade.  We will do everything to ensure that the museum lives and works," stressed the Chairman.

In the 1960s, the museum created its special and unique atmosphere. Local residents actively supported the position of the Head of the Investigative Committee, agreeing on the need to preserve the museum and all its exhibits in their original state. They also voiced the position that other cultural institutions should be established. Speaking about the importance of museums, A.I. Bastrykin stated that this is extremely relevant in a changing generation, as the lack of such institutions leads young people to forget the history of their country. The Head of the Investigative Committee also spoke about the systematic work of the agency's educational institutions to promote patriotism among young people.

The Chairman of the Investigative Committee of Russia heard again from the Head of the Leningrad Regional Investigative Department of the Investigative Committee of Russia, S.T. Sazin, and the staff of this department about the probe into the longstanding failure to maintain the museum building and the changes made without the necessary approvals. The investigation classified these acts under an article of the Criminal Code which provides for liability for violating the requirements for the preservation and use of objects of cultural heritage, monuments of history and culture of the peoples of the Russian Federation. The supervisory authority has not approved the indictment in the case. A.I. Bastrykin once again pointed out to his subordinates that failure to approve the indictment did not mean that the criminal case had to be terminated. He ordered a further investigation, including the circumstances of the possible loss of the museum's exhibits and other relevant facts.

In addition to questions related to the operation of the memorial museum, the local residents and veterans present at the meeting also touched on other topical issues. In particular, complaints about the lack of gas supply to settlements, water supply and electrification were heard. One of the residents spoke about possible numerous violations and illegally registered land plots on the territory of the district, including on the shore of Lake Ladoga, as well as destruction of the forest fund. It is noted that the massive allocation of land around the 101st Battery monument to private ownership has made it difficult for local residents to access the memorial. Artifacts from the war and personal belongings of those who died on the historic ice road are still found there. A children's camp located in the area is in disrepair. Following the numerous complaints, the Chairman of the Investigative Committee of Russia instructed the Head of the Leningrad Regional Investigative Department of the Investigative Committee of the Russia, S.T. Sazin, to carefully analyse all information and, if warranted, carry out procedural probes, making a legal assessment of the violations identified by local residents.

Citizens also spoke about other problems that are not within the competence of the Investigative Committee of Russia, explaining that local officials have been ignoring their requests for a long time. A.I. Bastrykin urged local authorities to engage in a closer dialogue with citizens and promptly solve their problems.

The head of the agency assured that he will meet again with local residents, and pre-planned the event for December.

Alexander Ivanovich also visited the branch of the Central Peter the Great Naval Museum "Road of Life" in Osinovets. After a large-scale renovation carried out on a tight schedule, the museum, decorated according to the latest science, presented a renewed exposition and became a place for the formation of historical memory. The head of the agency praised the careful and caring attitude of the institution's staff toward the museum's treasures and artifacts. Against this background, the President once again stressed the inadmissibility of losing such objects as the people's museum, which had fallen into disrepair.

In addition, at the end of the event, the Investigative Committee organized operational communication with local residents who were unable for any reason to participate in the discussion of pressing issues. More than a hundred people identified their concerns, information about which will also be accepted for consideration. 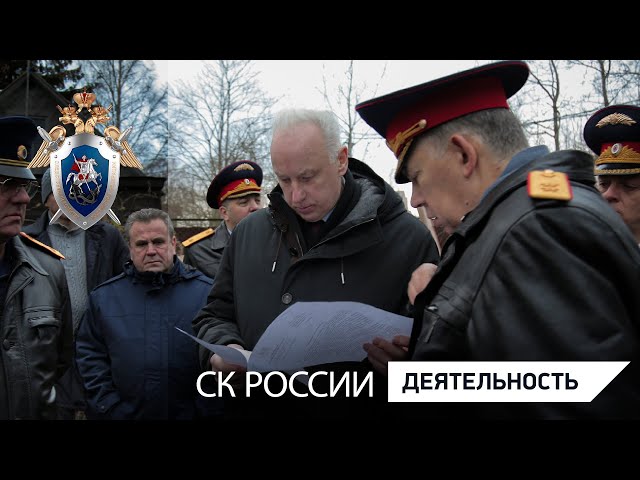