The Chairman of the IC of Russia stressed that over RUB 4 trillion had been allocated for implementation of these tools of the country's socio-economic development. It was noted that misuse of funds allocated for the implementation of programs took place in many constituents of the Russian Federation. “Corruption of officials, bribery, abuse of official powers, negligence, and embezzlement are the main crimes that committed in this area today, which hinder the fulfillment of national tasks,” A. I. Bastrykin observed. In this regard, a set of criminal and legal measures is being actively implemented. They are aimed at ensuring the security and proper spending of the allocated funds, effective suppression of criminal encroachments on the budget, inevitability of punishment for the perpetrators, and compensation of the caused damage.

Last year, investigative authorities of the Investigative Committee initiated 585 criminal cases on crimes in this area, which is twice as much as in 2020. The largest number of them is associated with implementation of demographic and housing programs. 200 criminal cases against 244 defendants, 144 of which were officials, were filed for trial. 57% of the damage was compensated at the investigation stage; in addition, the defendants' property was seized in the amount sufficient for compensating the material damage caused by the crimes.

Evaluating individual investigative units, Alexander Ivanovich outlined the lack of active work in this area in the Komi Republic, Voronezh Oblast, the Mari El Republic, and Chechen Republic. The head of the department drew the participants' attention to the need to improve the quality of the department's control over inspections, investigation of criminal cases, including organized corruption and economic crimes, as well as over adoption of procedural decisions on suspending preliminary investigations. Additionally, A. I. Bastrykin stressed the importance of timely appointment of forensic examinations. The Chairman of the Investigative Committee invited the heads of regional divisions to make more active use of the departmental expert institution's capabilities. Identifying the causes and conditions that contributed to crimes of this category and making submissions should become an integral part of the investigation.

The head of the department heard out the reports of the heads of investigative units that had shortcomings in the analyzed area. Head of the Investigative Department of the IC of Russia for Kirov Oblast A. P. Vinogradov presented a report. He provided details about the reasons for returning criminal cases for additional investigation and insufficiency of measures to compensate for the damage caused by the crimes. A. I. Bastrykin made a number of critical remarks, noting the low level of interdepartmental interaction with territorial law enforcement agencies, and gave specific instructions.

Having heard the report of Head of the Investigative Department of the IC of Russia for Chelyabinsk Oblast P. G. Reshetnikov, where a significant proportion of terminated criminal cases was noted, the head of the department instructed to study their materials in the Central Office of the Investigative Committee and to evaluate the justification of the decisions taken.

Following the meeting, the investigative unit heads are focused on scrupulously establishing the circumstances that contributed to crimes related to implementation of state programs, eliminating the prerequisites for criminal encroachments on budget funds at the early stages of spending them, as well as making proposals to improve the mechanisms of legal control over the use of funds allocated for federal projects. 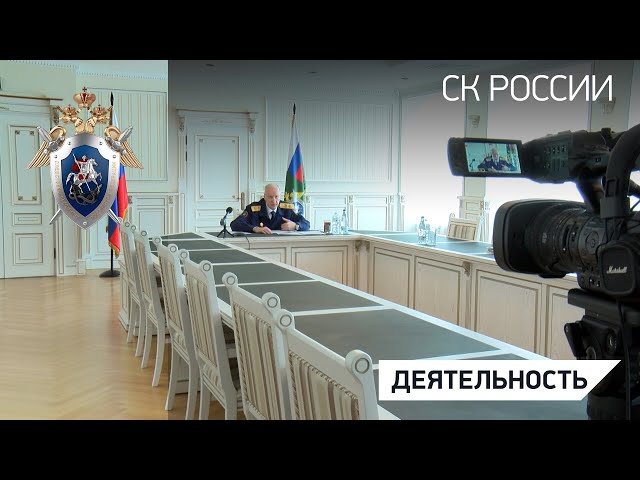