Officers of the IC of Russia Continue to Provide Assistance to Individuals Arriving from the DPR and LPR
05 March 2022
16:44
3
print version

For the past two weeks, officers of the IC of Russia have been visiting and helping refugees who arrived from the DPR and LPR, as the IC officers cannot stay indifferent and they care about people who find themselves in a difficult life situation.

In Nizhny Novgorod Oblast, cadets studying at the MAOU “Gymnasium No. 2” together with investigators from the regional Investigative Department, parents and teachers, realizing how important it is to help those who are in trouble, delivered humanitarian aid to people who arrived from the Donetsk and Lugansk People’s Republics.

The duty of an officer of the IC of Russia is not only to carefully and responsibly serve their official duties, but also to show empathy for people who find themselves in a difficult life situation.

In Voronezh Oblast, Ivan Vladimirovich Kovalev, the first deputy head of the Investigative Department, together with Irina Nikolaevna Popova, the Commissioner for Children’s Rights in Voronezh Oblast, visited orphans who had arrived from the Luhansk People’s Republic. The IC officers got acquainted with the conditions of residence and maintenance of internally displaced persons, discussed issues of a legal and social nature, including the restoration of lost documents, obtaining Russian citizenship, and medical support. Representatives of the Investigative Department expressed words of support and compassion to the displaced persons, and expressed their readiness to provide maximum support and assistance in emerging issues.

The officers of the IC always care and engage in issues of those who are in trouble or in a hopeless situation, and need support and attention.

So, a senior investigator of the Investigative Unit for the city of Konakovo of the Investigative Department of the IC of Russia for Tver Oblast held a meeting with 4 residents of the Donetsk and Lugansk People’s Republics who came to their relatives who have been living in Tver Oblast since 2014. Women and men shared with the investigator their memories and emotions about how, having taken the necessary documents and belongings, they had fled from their homes, first to Rostov-on-Don. There, they had been impressed by the sincere welcomes of the Russians who warmed them up, helped them get on the train to the capital of the Russian Federation, from where they got to Tver Oblast, to their relatives and friends. Talking with the investigator of the Investigative Committee, the guests told about the constant tension they had been living in since 2014, when ordinary civilians of the LPR and DPR were constantly shelled, people had been in fear and afraid to go out into the streets and had spent most of their time in basements.

Officers of the Main Investigative Department of the IC of Russia for St. Petersburg donated to the residents of the Donetsk and Luhansk People’s Republics 100 sets, which had been purchased at the expense of voluntary donations organized among the IC officers; the sets include a blanket, a pillow, bed linen, a towel, personal hygiene products, drinking water, long shelf life food.

Also, officers of the ID of the IC of Russia for Yaroslavl Oblast provide comprehensive assistance to refugees who have come to their relatives and friends living in the region.

On the eve of the spring women’s holiday, Sergey Tikhonovich Sazin, head of the Investigative Department of the IC of Russia for Leningrad Oblast, visited a large family who had escaped the war in Donbass. A mother of many children was presented with a bouquet of flowers, and children were given sweet gifts and toys. One of the daughters, with tears in her eyes, said that she still had toys left at home that she missed and dreamed of a big bear. The officers promised she would have a big teddy bear in her new home, and it did not take long to buy her a dream toy on the same day. At the meeting, Sergey Tikhonovich Sazin talked to adults and children and stressed that the officers were ready to provide the necessary assistance, as well as legal support on issues related to their legal status, moving to Russia, and any other problems.

Officers of the IC of Russia intend to continue to provide all possible support and assistance of a legal nature to refugees from the DNR and LNR. Also, investigators continue to work and record illegal actions on the part of the Armed Forces of Ukraine and the nationalist battalions.

It lies in our power to help these people, to support them, to listen to them. Therefore, we not only continue to investigate criminal cases of illegal actions of Ukrainian nationalists, but also try our best to support the elderly, women and children who were forced to leave their native land. 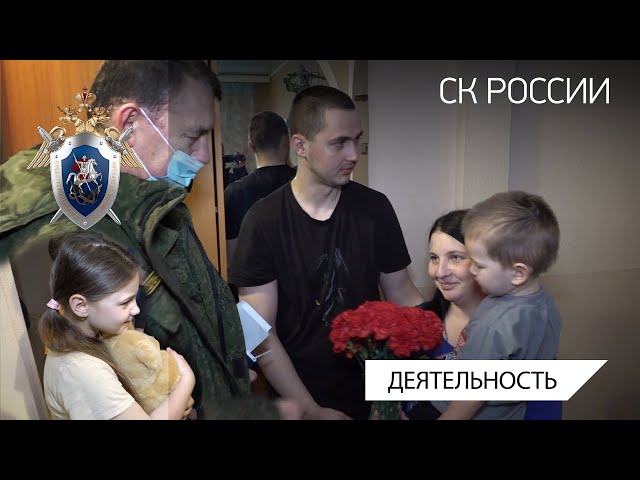