Employees of the IC of Russia Continue to Provide Assistance to Citizens Arriving from DPR and LPR
11 March 2022
14:18
1
print version

Employees of the IC of Russia continue to provide assistance and support to citizens who arrived from the LPR and DPR. Temporary housing facilities for Donbass refugees are deployed in more than 15 Russian regions; most of them are located on the territory serviced by the Western Interregional Investigative Department on Transport of the Investigative Committee of the Russian Federation. Employees of the department have joined the operational headquarters; they provide legal assistance to residents of the republics, explain the specifics of legislation, and, if necessary, help with paperwork.

Comfortable conditions have been created in temporary housing facilities and many arrivals have already settled at the new place and feel at home, but the investigators still ask them about their urgent needs in order to provide everything they require. Representatives of the Women's Council of the Western Interregional Investigative Department on Transport of the Investigative Committee of the Russian Federation visited the refugees at one of the housing facilities in Moscow Oblast. They brought treats and gifts for children and asked what the evacuees needed, how they spent their time, and how they adapted to living in new conditions. Also, employees of the Bryansk Investigative Department on Transport met with women and children at a temporary housing facility in Oryol Oblast.

Employees of the Military Investigative Department of the Investigative Committee of the Russian Federation for the Southern Military District organized a fundraiser, which enabled them to purchase and deliver more than 600 kilograms of food for orphans and children left without parental care who arrived from the LPR in Rostov Oblast.

One of the main tasks of the IC of Russia employees is to help people get used to a new place, to distract them from fears and hard memories.

A family from the Lugansk People's Republic arrived in Pervomaisky District of Altai Krai – 28-year-old Daria, her husband Mikhail and their two children, 4-year-old Alyona and 9-year-old Vyacheslav. Once in Altai Krai, they settled with her husband's parents in a small house in the village of Lesnoy. Having learned that the family needed certain items, the department staff organized an urgent giving campaign: the officers brought clothes, shoes for children and their parents, toys, food. Acting Head of the Investigative Department Igor Vladimirovich Kolesnichenko, the head of the Novoaltaysk Interdistrict Investigative Department and the department's investigator, senior assistant to the head of the investigative department, came to visit the family to present the raised clothes, products, and gifts.

Apart from that, on the Chairman of the IC of Russia's orders, the investigators take exhaustive measures to establish and document the criminal actions perpetrated by the Ukrainian Armed Forces in Donbass in order to collect the evidence based on the testimony of victims of the Ukrainian servicemen's actions.

Investigators of the Investigative Department of the Investigative Committee of the Russian Federation for Stavropol Krai actively work with the arrived citizens, documenting the crimes to which they were subjected in the republics. While doing so, the officers cannot remain indifferent to the refugees' fate. Last week, a large family from the Donetsk People's Republic arrived in the region. It was housed in a dormitory of a multidisciplinary technical school in the town of Mikhailovsk. The refugees were provided with everything necessary for a comfortable stay – hot meals, clothes. Employees of the investigative department visited the temporary housing facility, checked the housing conditions and living conditions of the children, as well as asked about their needs of social, day-to-day, and medical nature. In addition, the staff visited a 12-year-old boy who arrived in Budyonnovsky Okrug together with his guardian. The investigators learned about their legal and social issues and discussed ways to solve them. During the conversation, the officers told about the activities of the Investigative Committee of Russia, about departmental cadet classes and corps, about the Moscow and St. Petersburg Academies of the Investigative Committee of the Russian Federation, as well as about the quotas provided for orphans and children left without parental care.

In order to promptly resolve the issues related to obtaining citizenship of the Russian Federation, access of refugee children to preschool and educational institutions, employment, as well as medical and social services for citizens who arrived in the Chuvash Republic, it was decided to arrange their personal meeting with heads of law enforcement agencies and relevant ministries of the republic. Also, Head of the ID of the IC of Russia for the Chuvash Republic Alexander Vladimirovich Poltinin explained the arriving citizens the specifics of their legal status in a criminal case on crimes committed by Ukrainian armed units against civilians, which is currently being investigated by the Investigative Committee of the Russian Federation.

Hardships have been powerless to break the spirit of the Donbass residents, to embitter and make their souls callous. And now, away from home, they need to learn to live a normal peaceful life. Officers of the IC of Russia have committed themselves to provide comprehensive assistance and support to the refugees. 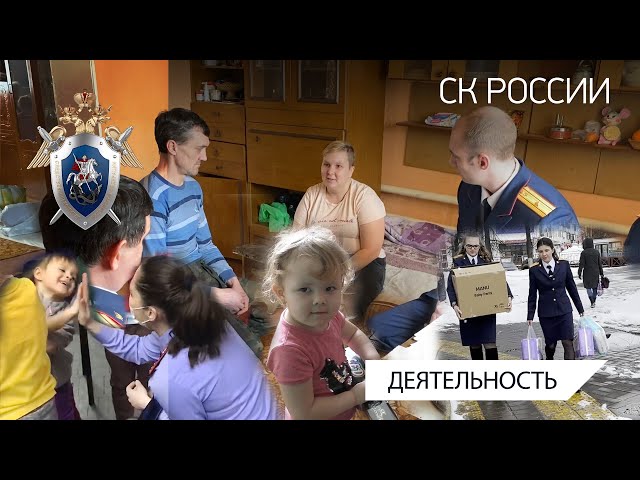