The Main Investigative Department of the Investigative Committee of Russia has initiated a criminal case against the commander of the 13th separate airborne assault battalion of the 95th separate airborne assault brigade of the Armed Forces of Ukraine Major Svyatoslav Zayats and other personnel of this unit. Their actions show signs of a crime under Article 356 of the Criminal Code (ill-treatment of civilians, use of means and methods prohibited by an international treaty of the Russian Federation in an armed conflict).

According to the investigators, on April 17, 2022, Svyatoslav Zayats and his subordinates fired 120 mm mortars at civilian infrastructure facilities in the village of Shirokaya Balka in the city of Gorlovka, Donetsk People's Republic. They fired at least 14 artillery mines.

In addition, two more criminal cases have been initiated under the same article of the Russian Criminal Code in connection with numerous instances of shelling of Donbass on April 17-18.

Ukrainian nationalists carried out massive precision artillery and mortar attacks with heavy weapons against civilian facilities in Donetsk, Gorlovka, Khartsyzsk, and Yasinovata, as well as in the settlements of Donskoye, Vladimirovka, and Nikolskoye of Volnovakha District, as well as Yevgenyevka of Velikonovoselkovsky District of the Donetsk People's Republic. As a result of these crimes, 1 person was killed and 15 civilians were injured, including three minors. Also, more than 40 houses were damaged by shell hits. Another 16 people injured between March 28 and April 17 sought medical help.

Ukrainian servicemen also mounted artillery attacks against civilian infrastructure facilities in Pervomaisky and Rubezhny of the Luhansk People's Republic. 2 civilians born in 1963 and 1952 were wounded, several residential buildings were damaged.

According to the investigators, all these actions were committed in execution of obviously criminal orders of higher commanders and officials of the Ministry of Defense of Ukraine. They violate the provisions of the Convention (IV) relative to the Protection of Civilian Persons in Time of War (Geneva, 12.08.1949) and Additional Protocol II thereto, as well as other international acts.
The Investigative Committee of Russia takes measures to identify officials from among Ukrainian servicemen involved in these and other crimes against civilian population. 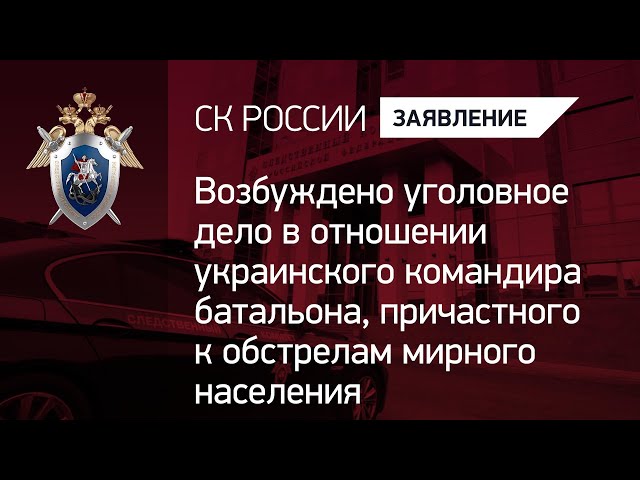