The Investigative Committee of Russia establishes the facts of genocide on the territory of Bryanskaya oblast during the Great Patriotic War
14 July 2022
09:45
1
print version

Within a criminal investigation of genocide during the Great Patriotic War, the Investigative Committee of Russia established the facts of the targeted slaughter of civilian population and prisoners of war by Nazi invaders and their accomplices on the occupied territory of Bryanskaya oblast.

The investigation is aware of the mass executions of the inhabitants of the village of Hatsun. Only in October 1941, following the Nazi command orders, the Germans killed 318 civilians, including 60 children aged 2 to 10 years.

It was also established that a transit camp for prisoners of war and the civilian population "Dulag-142" operated in Bryansk during the war years. It contained at least 80 thousand people, 40 thousand of whom were tortured and buried. So, according to the interrogation of one of the witnesses, who was in a concentration camp at the age of four together with her two sisters and a brother in 1942, they were kept in the barracks in inhuman conditions. Due to her young age, she did not work, but her blood was taken regularly. Other witnesses recall that they had to sleep on a frozen concrete floor, and the dead were taken out of the camp on a daily basis, the average amount of which equaled from 100 to 500 bodies.

According to available data, in total, the Nazi invaders and their accomplices have exterminated about 278 thousand peaceful Soviet citizens and prisoners of war during the occupation of Bryansk oblast. These facts are confirmed not only by the archival documents, among which there are the translated trophy papers, but also by the results of the investigative actions, including the interrogations of former prisoners of concentration camps and relatives of the victims, inspections of burials, including the conclusions of multiple comprehensive forensic, molecular genetic examination and other examinations.

All the collected evidence and the established facts indicate that these crimes are the part of the Nazi invaders plan intended to exterminate the civilian population of not only in individual settlements and regions, but of the entire Soviet people. 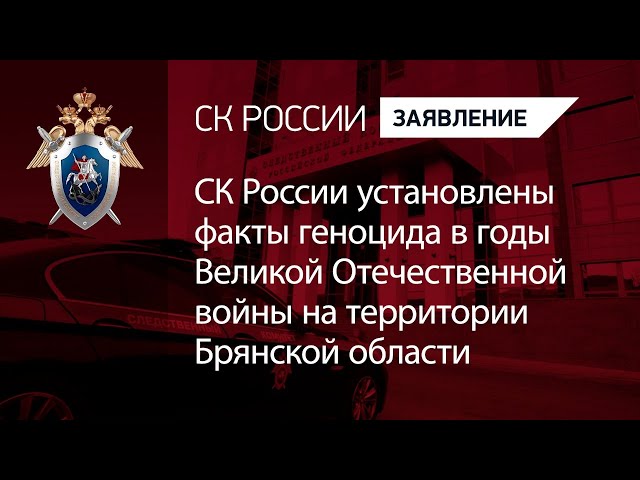