The Investigative Committee of Russia has collected an evidence for the commission of genocide during the Great Patriotic War on the territory of Leningrad
08 September 2022
09:00
1
print version

Within a criminal investigation of genocide crimes during the Great Patriotic War, the Investigative Committee of Russia continues its work at identifying the actual circumstances of the mass destruction of the civilian population committed by the German invaders and their accomplices.

During the archival documents and files of post-war trials research, interrogating witnesses and victims, conducting search activities and analyzing expert opinions, the investigators finalized an evidence for committing the genocide of the Leningrad population within the Great Patriotic War.

The investigation reliably detected and documented the facts of the purposeful destruction of the northern capital by the Nazi invaders, the commission of massacres of civilians and Soviet prisoners of war. As methods, the Nazi punishers chose food isolation, massive shelling and bombing. Even before the attack on the USSR, the plans of the military-political leadership of Nazi Germany noted that large industrial centers, including Leningrad, would not be supplied from the black earth zones intended to ensure the functioning of the German army, and the inhabitants of these centers would die or be forced to relocate.

Further orders given by the High Command of the Wehrmacht Ground Forces, directives from the command of the naval forces and the Chief of Staff of the Supreme High Command of the German Armed Forces indicate that the Nazis did not plan to capture Leningrad, did not intend to accept its surrender and did not let its inhabitants out of the city.

Thus, it is obvious that Leningrad blockage was not caused for the purpose of its further occupation due to military necessities. This plan of destruction by starvation was part of the general concept of "war of annihilation" created by Hitler and his military leaders. The intention to implement this plan is evidenced, in particular, it is supported by the choice of targets for the bombing of Leningrad. So, in September 1941, the Badaev food warehouses were the first to suffer, under constant bombardment was the "Road of Life", along which supplies were delivered to the city.

Massive artillery attacks were daily, sometimes they happened several times a day. All this led to the destruction of at least three thousand and this led to damage to more than seven thousand buildings.

The collected files also allow us to assert that the Nazi punishers deliberately destroyed unique monuments and architectural ensembles of Leningrad.

The Military Tribunal of the Leningrad Military Okrug, between 12/28/1945 and 01/04/1946, identified that the Nazi invaders barbarously destroyed, burned and robbed palaces and parks in the Pavlovsk, Pushkin, Peterhof towns. They destroyed the famous system of Peterhof fountains, looted over 100 thousand museum exhibits and no less valuable books. The State Hermitage was subjected to massive shelling, namely: the methodical and consistent bombing of the building of the Winter Palace clearly testified to attempts to deliberately destroy one of the main cultural assets of Leningrad. Such actions of the Nazis were aimed at eliminating any reminders of the civilization of the national group and the eradication of its historical and cultural self-identity.

All the collected evidence and detected facts indicate that the crimes were part of the Nazi invaders plan to exterminate the civilian population not only of individual settlements and regions, but of the entire Soviet people. 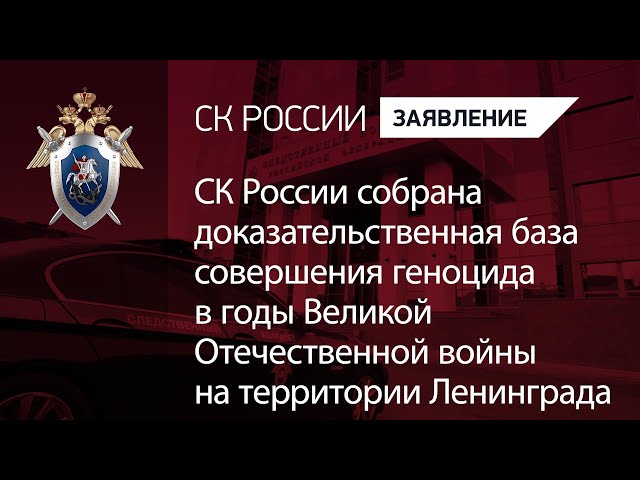