The Chairman of the Investigative Committee of Russia spoke at an international practical conference at the A.I. Burnazyan Medical Center and congratulated the institution on its anniversary
16 November 2021
20:00
4
print version

The Chairman of the Investigative Committee of the Russian Federation Alexander Bastrykin took part in the Jubilee International Scientific-Practical Conference "The A.I. Burnazyan Federal State Research Center of the Federal Medical and Biological Agency of Russia: 75 years on guard of human health".

In 2021, the State Research Center Burnazyan Federal Biomedical Center celebrates its 75th anniversary. The creation of this unique scientific institution is inextricably linked with the development of the national nuclear industry and the new era of health care. It was noted at the conference that the center has no analogues among medical institutions in the world.  But the main wealth of the medical institution is its staff: scientists, doctors, specialists, who for almost a century have solved the most important state problems, introduced highly effective methods in treating diseases, and developed new drugs.

Thanks to the efforts of specialists of the Federal Medical and Biological Center today it is a leader in the field of high-tech medicine, its activities cover not only scientific research, but also professional training, medical and sanitary support of citizens, including in radiation accidents and terrorist acts, including psychophysiological research and development in the field of psychology of extreme situations. Every day the center's specialists, being at the forefront of the fight against human misfortune, selflessly perform their service duty, fighting for someone else's life, often risking their own.

Addressing the staff and veterans of the center, Alexander Bastrykin noted that "the most important thing is the mission of treatment, the humanitarian component. When it's hard and difficult, we really need highly qualified medical help. I was especially impressed by the museum of your center, where one of the main exhibits is the uniform of Lieutenant General of Medical Service A.I. Burnazyan. He went all the way from Moscow to Berlin. Our Soviet state is a great past, and we need to tell more about your achievements to our youth, to future generations of physicians. Thank you for your hard work, your heroism, today you are at the front again. Best wishes to you and your loved ones. Take care of yourself".

The memorial award was also given to Alexander Samoilov, General Director of the Burnazyan Federal Medical and Biological Center, and a number of doctors of the medical institution: Valeria Arkhipova, Tatiana Galkina, Maxim Lashchik, and Maxim Semyonov. 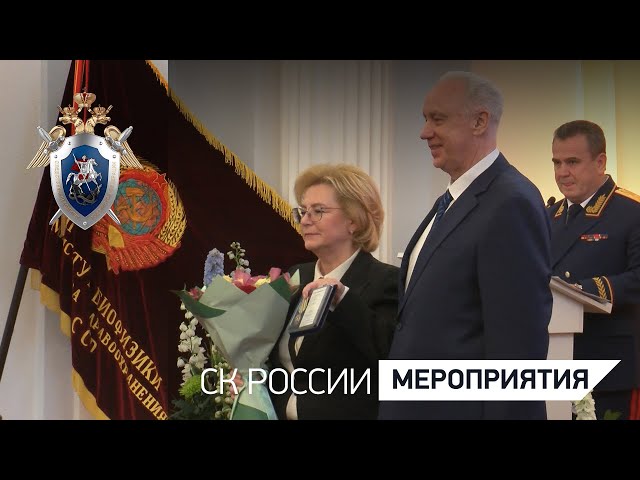