The Chairman of the Investigative Committee of Russia and heads of a number of subdivisions granted New Year wishes to children
28 December 2021
18:55
9
print version

The traditional All-Russian charity event "Wishing Tree" takes place during these winter pre-holiday days all over the country. During this magical time, children's deepest dreams come true.  And the helpers in this are adults, including officers of the Investigative Committee of Russia. Yes, in anticipation of the holiday we also, as in childhood, expect a miracle and the fulfillment of cherished desires, but the best reward, warming our hearts - it's children's smiles and happy eyes. After all, many children, unfortunately, have already faced very tough tests of life.

On the eve of the holidays the staff of the Educational Work Department of the Investigative Committee of Russia visited the Pirogov Russian Children's Clinical Hospital.  Arslan Shagapov is under treatment there. Arslan has had many operations, but he is firmly tolerating all the difficulties and hopes to come home soon. Arslan's mother Julia tries to be with him all the time. Inside the hospital there is a warm and festive atmosphere and a decorated Christmas tree, so that the children who are under treatment may feel a special mood of the approaching New Year.  Since the young patients have to spend this time away from home, the officers of the Russian NC decided to fulfill the wishes of the children as part of the campaign. For example, Arslan dreamed of a Lego constructor to distract him from his procedures.   From the Chairman of the Investigative Committee of Russia, he was given the long-awaited gift. The officers also asked the family what kind of help they needed. According to Yulia's words, the doctors do everything possible for her son's recovery.

Danis, 7, is under treatment at the surgery department along with Arslan. The guys are very friendly and try to support each other. Danis was also given a Lego set. The boy's mother Larisa Mansurovna expressed her deep gratitude to the officers of the Investigative Committee of Russia for their attention.

S.L. Petrenko took a dream toy from the Christmas tree for twins Anya and Yana. In their letter the sisters had expressed a desire to become doctors, and were eager to learn a little about this difficult profession. Svetlana Petrenko provided an opportunity for the girls to visit the Children's City of Professions at the Central Children's World, where they visited different locations, tried out various roles and now have a choice between being a doctor, a florist and a designer. Svetlana Lvovna spoke to the children and their mother on the phone and wished them a Happy New Year.

D.I. Sundikov fulfilled the dream of 8-year-old Zhenya, who wanted to get a robot as a gift. The girl and her mother were invited to the central apparatus of the Investigative Committee of Russia, where there was not only a robot dog, but also many other surprises. In particular, the little girl was given a ride in a real service car with special signals, which caused Zhenya's incredible delight.

The "Wishing Tree" became a bright symbol of kindness and peace. On its branches are strung not just balls with notes, but sometimes difficult children's lives. Among the multi-colored splendor there are truly amazing human stories. And we, officers of the Investigative Committee of Russia, are happy to be part of such a bright tradition. 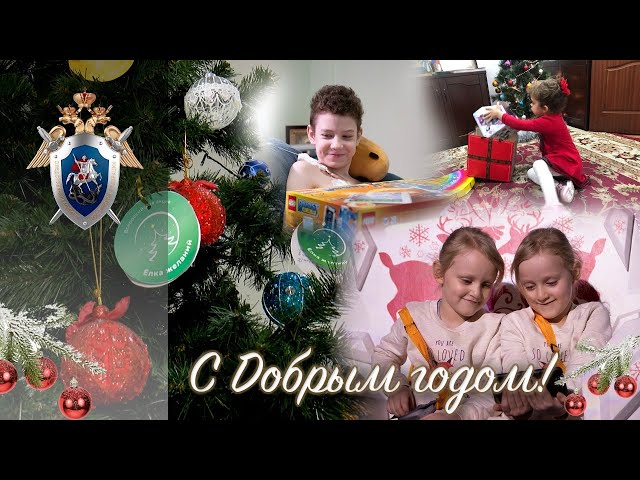