A meeting is hold on the prospects for the development of psychological service in the Investigative Committee of Russia
17 November 2022
20:15
15
print version

In his welcoming speech, Mr. A.I. Bastrykin noted that the effective interaction of Investigators with Psychologists is one of the conditions for a timely and high-quality investigation of crimes. The Head of the Department emphasized that the use of new methods developed by psychologists is a significant addition to the forensic tools, which allows Investigators to identify and solve crimes more successfully in practice, expose the perpetrators and exclude the suspicion of persons not involved in the crimes. In addition, he told that special positions of Psychologists have been introduced into the staff of the Main Forensic Directorate of the Department since 2008. Staff Psychologists ensure the protection of the juvenile rights, accompanying individual procedural actions, use the methods of visual psychodiagnostics, applied psychology to activate memory, draw up portraits, and also analyze the behavior of participants in criminal proceedings.

The Chairman of the Investigative Committee of Russia added that the involvement of psychologists contributed to the investigation of a number of high-profile crimes. Among them are a terrorist attack near the Central Market in Vladikavkaz in 2008, the murder of an Officer of the Investigative Committee in Leningrad Oblast, a series of murders of women in Angarsk, Irkutsk Oblast, a fire in "the Winter Cherry" mall in 2018, an armed attack on a school in Kazan in 2021 and many others.

Having highlighted the aspects of future psychologists trainings on the platform of the St. Petersburg Academy of the Investigative Committee in the specialty "Employment (service) Psychology", the Head of the Office instructed the Acting Rector of the Moscow Academy to study the issue of forming a similar educational direction. In addition, Mr A.I. Bastrykin instructed to intensify scientific activity in this area, noting the expediency of preparing monographs and subsequent inclusion in Forensic Textbooks of a special section - "Forensic Psychology".

Ms. A.Yu. Kuznetsova, Deputy Chairman of the State Duma of the Federal Assembly of the Russian Federation, spoke about the establishment of a Unified Legal Framework in the field of psychological assistance. She stressed that the main task is to make such assistance available and possible to regulate the issues of its provision at the legislative level. "The draft law, which is now being developed by Mr. Yuri Petrovich Zinchenko, Ms. Yulia Sergeevna Shoigu, colleagues from the Ministry of Health, Mr. Oleg Olegovich Salagy, together with Deputies, aims to formulate the very concept of psychological assistance, the requirements for psychologists, to create legal conditions for high-quality assistance, to lay the foundations for further development. It is necessary that this helps people get high-quality and affordable psychological assistance here and now and work for the future," summed up Ms. A.Yu.Kuznetsova. She also expressed her gratitude for the activities that the Russian Investigative Committee is conducting in the liberated territories, and she thanked for the hotline arrangement to help citizens. In addition, Ms. Anna Yuryevna noted that the Investigative Committee of Russia performs an important mission to protect children.

Reports were made by the Heads of the Divisions of the Main Directorate of the Investigative Committee of Russia: Head of the Main Forensic Directorate (Forensic Center) Mr. A.I. Sazonov, Head of the Directorate for Educational Work, Hero of Russia Mr. S.V. Petrov, Head of the Fourth Directorate (organization of personnel training) N.M. Sobchenko. In their reports, they reflected the issues of optimizing the number of specialists in this field, psychological rehabilitation, interaction with colleagues from other Directorastes and Institutions, providing advisory and methodological assistance, training and acquiring professional skills by psychologists. The speakers paid special attention to the formation of Uniform Criteria for the psychological selection of candidates for service in the Russian IC system, which are presented in the form of a legislative initiative and sent for approval to the relevant Ministries.

After hearing all the Participants, Mr. A.I. Bastrykin summed up the meeting, which was an important step towards Interdepartmental Cooperation. The Head of the Russian Investigative Committee gave a number of instructions to his subordinates. Among them were the organization of an internship for psychologists who graduated from non-departmental Educational Institutions, the formation of an Expert Council with the participation of representatives of the Ministries of Education, Science and Higher Education of the Russian Federation, the preparation of Interdepartmental Acts in order to increase the effectiveness of interaction in the area under discussion, the publication of a regulatory document regulating the establishment of Psychological Agency Services. In addition, a preliminary agreement was reached on making additions to the Agreement on organizing targeted training for specialists in the field of psychology and further building up joint scientific potential, which was concluded earlier between the Investigative Committee of Russia and Moscow State University named after M.V. Lomonosov. As a result of the meeting, a partnership was also established with the Moscow State Psychological and Pedagogical University. In addition, the Head of the Department instructed to prepare a draft Agreement with the Russian Emergencies Ministry regarding the work of Psychological Units.

The Participants of the Event noted that the developed solutions contribute to building systematic work in the field of training psychologists, careful personnel selection, and the formation of correct ethical and spiritual values ​​among the younger generation. 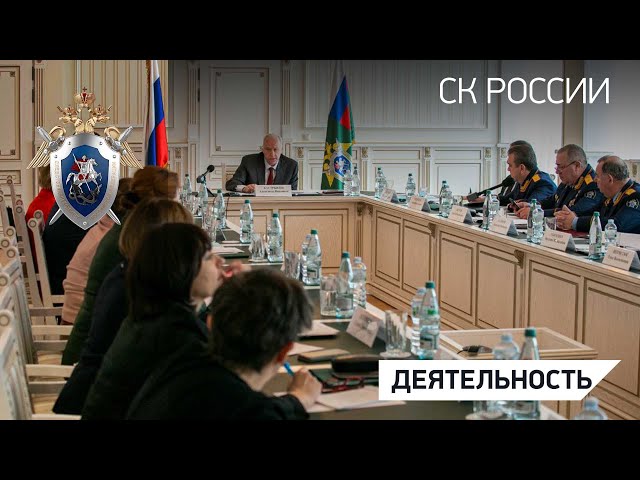