The Chairman of the Investigative Committee of Russia holds an operative meeting on issues of protection of rights of participants in shared construction
29 June 2021
18:19
3
print version

In the beginning of the meeting Alexander Bastrykin listened to directions of a number of regional departments on separate incidents related to infliction of rights of minors and entailing deaths of children.

Thus, the head of the Investigative Committee of Russia gave a number of instructions to the head of the Leningrad Regional Investigative Department of the Investigative Committee of Russia Sergey Sazin on a probe into rendering of unsafe services to vacationers in Mechta children's healthcare camp in Priozersky District of Leningrad Region (Paragraph A of Part 2 of Article 238 of the Criminal Code of Russia). He demanded from the regional subordinates a comprehensive legal assessment of actions (inaction) of officials of supervisory and other authorities that were supposed to monitor the state of affairs in the organization.

The acting head of the Krasnodar Regional Investigative Department of the Investigative Committee of Russia Andrey Maslov reported about the incident in the territorial children's health camp Medvezhonok with a girl that received injuries and a process of preliminary assessment of the quality of services provided by the camp. The participants also discussed the situation in the stationary children's health camp Bailak located in Tandinsky District of Tyva Republic. Upon reports about a coronavirus outbreak in the camp, investigators began a procedural assessment of the quality of provided services. Taking into account the results of Rospotrebnadzor assessment, the head of the Committee demanded from the acting head of the Tyva Republican Investigative Department of the Investigative Committee of Russia Gennady Kuru to launch a probe and subsequently present a plan of preliminary investigation.

The relevant results of investigation of a probe into murder of a 13-year-old girl in Belaya Kholunitsa town of Kirov Region presented by the deputy head of the department Andrey Sitchikhin were heard separately. Alexander Bastrykin has already instructed the Central Office to supervise the progress of the investigation. The subordinates were given a number of instructions defining the plan of future investigation. Among other things, the regional unit should ensure operational interaction with the Forensic Expert Center of the Investigative Committee on the appointment and conduct of the full range of forensic examinations necessary for the investigation, including the psychological and psychiatric examination of the accused. The head of the Primorsky Regional Investigative Department of the Investigative Committee of Russia reported on the measures taken to locate the children lost in Lesozavodsk. According to data obtained during investigation of the probe, the children were last seen on a river bank in a place not intended for swimming. A body of one of the three boys was found with signs of drowning, search for two other children continues with involvement of EMERCOM, police, Customs Department of the Federal Security Service, military personnel and representatives of the Cossacks, the volunteer movement and volunteers from among local residents.

The head of the Committee requested a report on fulfillment of the instructions from all the said heads of departments. Concerning the organization of children's recreation, Alexander Bastrykin added that it is necessary to pay attention to the actual state of affairs in children's camps, to establish the causes of accidents, to give a legal assessment to the actions of the organizers of such recreation and officials of local regulatory bodies.

Proceeding to the issue of investigation of offenses in the field of shared construction and measures for restoration of rights of defrauded shared construction participants, the Chairman presented some statistics data. At the moment, there are 2,810 houses in the Unified Register of Problematic Objects in the Russian Federation. In general (through all law enforcement agencies), since the beginning of this year there have been registered 402 crimes related to the participation of citizens in the construction of apartment buildings, more than a third of which are in the capital.

It was noted that the completion of problematic facilities was included in a unified plan to achieve the country's national development goals until 2024. Last year, 48 thousand victims of unscrupulous developers were restored to their rights, significant budget funds are allocated to solve the problem.

The Chairman of the Investigative Committee gave the necessary instructions to improve the efficiency of work in this direction. Heads of departments were instructed to continue substantive interaction with regional divisions of law enforcement agencies, control and supervisory bodies, local administrations, ministries of construction to identify possible abuses in the field of shared construction; to reinforce the efforts of the state in every possible way by measures of the criminal law. Apart from that, Alexander Bastrykin recommended to introduce the organization of targeted personal receptions into practice to receive the defrauded shared-construction participants.

In terms of the briefing, Alexander Bastrykin also listened to a report of the Deputy Chairman of the Investigative Committee of Russia Sergey Goryainov on current epidemiological situation. It was noted that the dynamic growth in the incidence of coronavirus infection in all regions remains, there are new cases of morbidity among the officers of the Committee and students of educational institutions of the Investigative Committee of Russia. The Deputy Chairman indicated the twofold increase in the vaccination rate among the officers of the Investigative Committee of Russia and suggested additional measures to prevent the spread of the disease. It is planned to transfer all events to video-conferencing mode, and non-vaccinated employees to remote operation. The chairman demanded that the subordinates strictly adhere to measures for prevention of the spread of infection, as well as actively continue advocating with the Committee staff about the consequences of the Covid-19 and the need for vaccination. 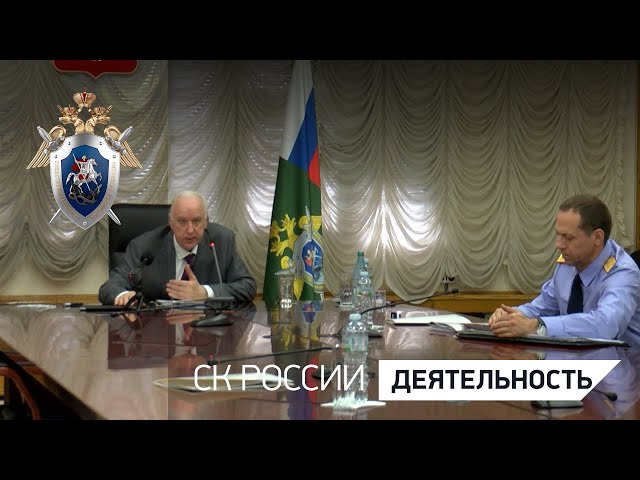