On New Year's Eve, employees of the Investigative Committee of Russia held a holiday event for children from sponsored families and institutions
24 December 2021
11:06
2
print version

On the eve of the New Year holidays employees of the Investigative Committee of Russia organized a good action for children from sponsored families and children's institutions. Together with officers of the agency they visited the "Steam Locomotive" animated film studio in Moscow.

Thus, the participant of the tour was a boy Kolya from the Moscow Region, who is the younger brother of the deceased Zhenya Tabakov - the youngest hero of Russia. Zhenya's life was tragically cut short on November 28, 2008. Then the bandit got into the apartment where the boy was with his twelve-year-old sister Yana. The intruder attacked the girl, but at the terrible minute seven-year-old Zhenya was not confused and fought back the criminal - he grabbed a kitchen knife and hit him, which distracted the villain and gave Yana the opportunity to run out of the apartment and call for help. The enraged criminal retaliated by stabbing the boy eight times; unfortunately, Zhenya's wounds proved fatal. In school No 83 of Noginskiy urban district, where the young hero studied, a monument was erected. In memory of Zhenya, the educational institution was named after him. Officers of the Investigative Committee of Russia continue to support the family of the deceased hero. Kolya's and Zhenya's mother, Galina Petrovna, is an employee of the Investigative Committee of Noginsk, and she also came on the tour together with her youngest son.

Among the visitors of the studio also were two brothers - 10-year-old Maxim and 11-year-old Vitya, pupils of the Center of Family and Children Support "Zyuzino" of South-West Administrative District of Moscow, which is connected with officers of Investigative Committee of Russia for Moscow by strong bonds of friendship. According to their teachers, Maksim and Vitya are very inquisitive and hardworking children; they study hard and help their elders in everything. The boys were very pleased to be invited to such a unique studio.

Among those invited were Nikolai and Matvey from Serpukhov near Moscow. At the beginning of December they were caught up in an emergency in the village of Lukyanovo. Nikolai, Matvey and their third mate went out on an ice-covered body of water, and then, walking away from the shore at a distance of about 70 meters, two of them fell through the ice. Nikolai, who remained on the surface, managed to pull Matvey out of the pond; unfortunately, the second child died.

The studio staff organized a tour. Guests saw with their own eyes how cartoons are produced, met the artists and actors who voice animation. Children and their attendants were able to try drawing characters for future cartoon series. After the tour, officers of the Investigative Committee of Russia and the studio gave presents to the children. 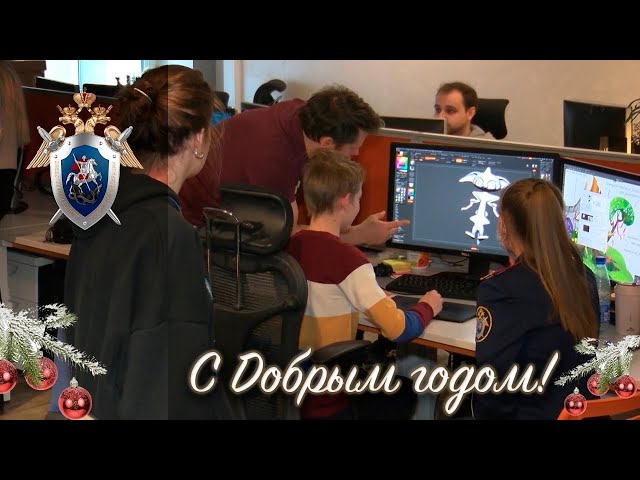