Chairman of the Investigative Committee of Russia holds a brief meeting in Mariupol
30 December 2022
11:40
7
print version

The Chairman of the Investigative Committee of Russia addressed the Acting Heads of the Investigative Directorates of the new regions: "There is a lot of work to be done, and ut us related not only to investigative work, but also to work on arrangement, recruitment, organization of activities, logistics. Therefore, please quickly get up to speed, establish contacts with our leaders who work here, with the local administration." The Head of the Department demanded the efficient work of the Investigative Units to be established as soon as possible, and also he listened to the problems that need to be resolved. Mr. A.I. Bastrykin instructed to prepare reports on the selection of buildings and material and technical equipment of directorates and divisions for further informing the Executive Authorities. In addition, he gave a number of instructions in the field of legal regulation of the activities of structural divisions of the Russian Investigative Committee.

The Head of the Department was informed about the latest information on the results of the investigation of the crimes committed by the Kiev regime against the civilian population and Russian Military Personnel.

During the preliminary investigation of criminal cases on the crimes of Ukrainian nationalists in Mariupol, it was detected that the distribution of forces and means of defense of the city was carried out by Officers from among the Military Personnel of the 12th brigade of the National Guard of Ukraine, which also included the Azov regiment (the organization’s activities are banned on the territory of the Russian Federation ). The agreed action plan implied a breakdown of the city into sectors with an individual area of responsibility (A, B, C and D).

During the period when Russian troops were organizing humanitarian corridors through Sector A, the soldiers of the National Guard of Ukraine artificially created obstacles to the evacuation of civilians from the city. Civilians became a living target for Ukrainian punishers who killed them with various types of weapons, because civilians were not able to leave the city and moved around the area in search of food. Thus, only in April 2022, the bodies of 51 civilians were found in the positions abandoned by the Ukrainian troops, and after the complete liberation and survey of the city, their number amounted to more than three thousand.

After listening to the reports of his subordinates, the Chairman of the Investigative Committee of Russia noted that the evidence base created by the investigation should be extremely clear and understandable in the subsequent consideration of criminal cases in court. Mr. A.I. Bastrykin drew attention to the fact that criminal prosecution of the leadership of the armed formations of Ukraine should be based both on the testimony of Russian and Ukrainian military personnel, and on a detailed establishment of the facts of issuing deliberately criminal orders by them to destroy the civilian population and prisoners of war.

During the investigation, new information was obtained about the participation of foreign mercenaries in the units of the armed formations of Ukraine. So, from the testimony of one of the prisoners it follows that in the unit of the 36th separate brigade of the Marine Corps there were citizens of Great Britain. They have been serving in the Armed Forces of Ukraine since 2020, actively participating in preparations for conducting combat operations in urban areas. In addition, Ukrainian military personnel were trained by instructors from Germany to storm buildings and shoot from foreign-made weapons. During the meeting, it was noted that at present, information regarding the financing of the activities of mercenaries on the territory of Ukraine is being established in detail.

Forensic Specialists, together with experts, continue to provide practical assistance to investigators in the criminal investigations of cases. To date, an expert group has been established with its deployment in Lugansk, in the future it is planned to establish a similar group on the territory of Melitopol.

To date, the proceeding of estimated construction and technical forensic examinations for more than 68 thousand objects has been fully finalized for the inspected objects of the residential blocks and infrastructure of the Donetsk and the Lugansk People's Republics. According to the conclusions of experts, the amount of damage caused is at least 228 billion 234 million rubles.

In the Main Investigative Directorate of the Investigative Committee of Russia work on the analysis of testimonies of witnesses, victims and detainees; it was organized from the very first days of the Special Military Operation, according to the results of such an analysis, information about the determined places of murders and the discovery of the bodies of civilians are inserted on the map. The result of the work clearly indicates the involvement of the Armed Forces of Ukraine in the executions of civilians, but it does not allow identify the victim. In this regard, it was proposed to organize work on the formation of a DNA database of persons who died in Mariupol for its further being used in resolving the problems assigned to the investigation, as well as to provide relatives with the opportunity to find out the fate of their loved ones who are reported missing.

It is considered expedient to orient investigators not only to obtain information from them about the circumstances and time of loss of communication, but also biological material for comparative research, in the case when persons who have lost contact with relatives from Mariupol apply to the Investigative Bodies of the Investigative Committee of Russia. In conjunction with the data obtained, the proposed DNA database will help identify the victims and establish additional information about the crimes committed by the Armed Forces of Ukraine.

Inquiring about the availability of sufficient technical capabilities of the Forensic Expert Center of the Investigative Committee of Russia to carry out this work, Mr. A.I. Bastrykin instructed to organize activities to form such a local database.

Following the meeting, the Chairman of the Investigative Committee gave a number of instructions and outlined the deadlines for their implementation. Also Mr. A.I. Bastrykin presented Departmental Awards to Officers of various Divisions of the Russian Investigative Committee, noting the contribution of each to the common cause of investigating the crimes committed by the Kiev regime. 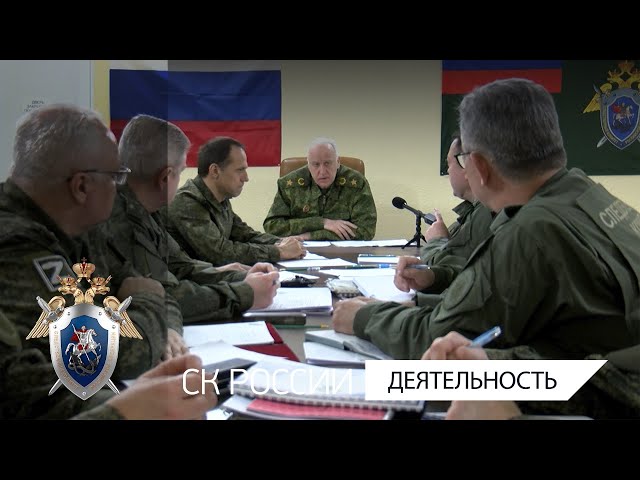