The Chairman of the Investigative Committee of Russia takes part in an event dedicated to the 125th anniversary of the Research Institute of Emergency Pediatric Surgery and Traumatology
27 October 2021
19:03
9
print version

In Moscow, the Research Institute of Emergency Pediatric Surgery and Traumatology held a gala event to mark the 125th anniversary of the establishment of this unique medical facility, which has no analogues. The anniversary date is related to the opening of the hospital in 1896 in a mansion purchased by the Iveron Community of Sisters of Charity. At that time it consisted of two wards, and decades later on the basis of a small hospital grew into a research institute, within the walls of which today the most complex operations are performed and the lives of young patients are saved.

The event, which was attended by Leonid Roshal, president of the Institute, its director Valery Mitish, the medical staff of the institution, was attended by Alexander Bastrykin, Chairman of the Russian Investigative Committee, Anna Kuznetsova, Deputy Chairman of the State Duma of the Russian Federation, joined by the Soviet and Russian cardiac surgeon Leo Bokeria in a video conference.

After congratulating the staff of the Institute on the anniversary, the head of the Russian IC expressed words of gratitude to Leonid Mikhailovich and all the staff of the Research Institute, noting their invaluable contribution to improving the health of Russia's future - our children. "Today in the 21st century people in white coats are perceived by the vast majority of people in our country as representatives of not only the noblest and most humane, but also heroic profession. Your dedication to your chosen profession, your willingness to sacrifice, and your loyalty to the Hippocratic Oath are truly admirable. You fight all day long for the health of young patients, overcoming the horrendous pressure to continue to do your job - to save and treat children, to bring them back to full life", he stressed.

Alexander Ivanovich also noted the productivity of interaction between the Investigative Committee and the Institute in the protection and rescue of children: "Your work does not know rest and weekends, requires professionalism, full emotional commitment and infinite patience. For all the different tasks of the Investigative Committee and Dr. Roshal's Research Institute, our goal is the same - to make life better, fairer and cleaner. And the most important reward is the happy smile of a saved child.

Over the period of its operation, the Research Institute of Emergency Pediatric Surgery and Traumatology has become a hallmark of all-Russian medicine, a symbol of unselfishness, high compassion, attention and kindness, responsibility, courage and fidelity to duty.

During the celebration other kind words and wishes to the staff of the institute were pronounced, which were united by the recognition of the merits of the medical staff of this institution. A number of research workers were also awarded, including with departmental awards of the Investigative Committee of Russia. Leonid Mikhailovich Roshal, Valery Afanasyevich Mitish were awarded medals "For high citizenship" by the Chairman of the Investigative Committee, other doctors were awarded medals "For assistance" and valuable gifts. The head of the IC of Russia also noted the great contribution to the activities of the institution of doctor Galina Ivanova, who has been helping people for 50 years. Alexander Ivanovich Bastrykin thanked her for her dedication to her profession. 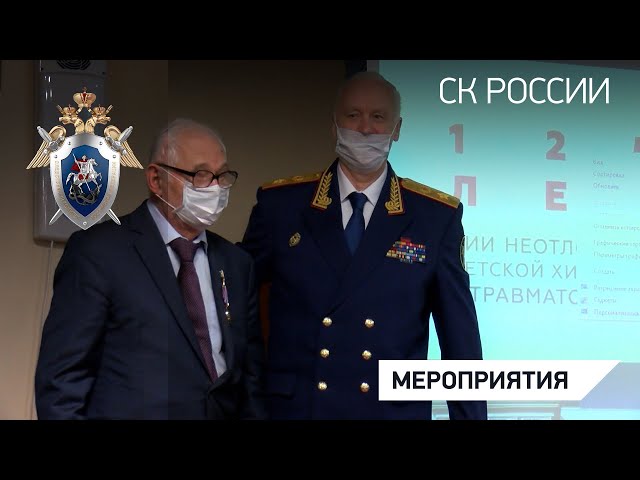