Since 2014, Ukrainian armed forces have been conducting military operations on the territory of Donbass, and all this time – for almost 8 years – the Ukrainian authorities and representatives of the country's paramilitary formations have been eliminating the civilian population of the self-proclaimed LPR and DPR.

Incessant shelling from large-caliber artillery, mortars, grenade launchers, and small arms ends lives of thousands of people. Elderly people and children are among the dead. The lives of other ones are permanently ruined due to serious injuries. Ivan Voronov, who miraculously survived a shell explosion, is an example of such a life. These people, and especially children, do not participate in the armed conflict. Surely, it is also obvious for the Ukrainian servicemen, who fire precision shots at residential buildings, schools, hospitals, cultural centers, facilities essential to living in settlements, and public transport. Nevertheless, the official Ukrainian authorities pay no attention to the ruthless executions, failing to guarantee security of the civilian population. On the contrary, they ignore this problem and encourage their military personnel's illegal actions contrary to the agreements concluded at the international level.

Having all the required legal grounds, since 2014, the Investigative Committee of Russia has been investigating hundreds of terrorism- and extremism-related crimes against peace and security of mankind committed during the armed conflict. Based on the documented facts, 467 criminal cases were initiated on the events occurred in Ukraine and Donbass. Their defendants are representatives of the military and political leadership of Ukraine, members of the radical nationalist associations Right Sector, Volunteer Ukrainian Corps, members of the Azov battalion, and all those involved in these crimes.

The investigators established that since April 2014, the Ukrainian side, when firing at the settlements of the two self-proclaimed republics, had been using Tochka-U tactical missile systems, Grad and Uragan multiple launch rocket systems, unguided aircraft missiles, other types of heavy offensive high-destruction weapons of indiscriminate action, as well as small firearms. As a result, at least 5,500 civilians were wounded. More than 2,600 civilians were killed. More than 2,200 civil infrastructure facilities have been destroyed or partially destroyed. The civilian casualties mainly resulted from fire delivered by the Ukrainian government forces by means of explosive weapons, small arms, and light weapons. Over the entire period of the investigation, more than 146 thousand people were interrogated, more than 22,000 were recognized as victims, including more than 2,400 minors.

103 persons have already been brought to criminal responsibility in absentia for committing crimes against peace and security of mankind during the armed conflict. Among them are former minister of internal affairs of Ukraine Avakov, former governor of Dnepropetrovsk Oblast of Ukraine Kolomoisky, brigade commanders and servicemen of the Armed Forces of Ukraine who fired at civilians.

The crimes committed by the Ukrainian military forces and officials include not only the use of prohibited means and methods of warfare, but also the murder of Russian journalists, as well as human rights activist Andrei Mironov and Italian citizen Andrea Rocchelli, kidnapping, obstruction of the legitimate activities of a journalist, torture, incitement of hatred or animosity, public calls for unleashing an aggressive war, and other crimes. Thus, the investigators registered abduction of Russian citizens on the territory of Ukraine by members of a criminal community with participation of SBU officers. Their goal was subsequent exchange of people for Ukrainian servicemen, mutilation of the prisoners, ill-treatment, torture, harassment of civilians in the south-east of Ukraine.

Earlier, a verdict was passed against Savchenko, whom the court found guilty of committing the murder of Russian journalists and illegally crossing the state border of the Russian Federation. Another convict is Litvinov, who was found guilty of committing a robbery involving violence against a Russian citizen on the territory of Ukraine. A number of other persons were convicted in absentia.

The investigators registered 21 cases of attacks on Russian diplomatic institutions in Kiev, Kharkov, Lvov, as well as obstruction of the exercise of the electoral rights of Russian citizens on the territory of Ukraine. 25 persons involved in these crimes have been identified. Among them are former deputies of the Ukrainian Verkhovna Rada Lozova and Parasyuk. Identification of other attackers is underway.

The evidence obtained during the investigations is also used in shaping the country's stance in various international judicial instances. The "Russia vs. Ukraine" lawsuit that the ECHR has been considering since July 2021, is based on copies of criminal case materials submitted by the Investigative Committee on the facts of genocide of the Russian-speaking population of Donbass, attacks on Russian foreign institutions, shelling of Rostov Oblast, murders, and other violent actions against journalists. With the assistance of the IC of Russia, representatives of Russian legal entities processed over 39 thousand dossiers; as a result, more than 7350 complaints of victims of the Ukrainian authorities' actions were prepared and filed with the ECHR. The total amount of claims to be compensated under the complaints is over €310 million.

Each verdict and accusation are supported by specific evidence, which, naturally, includes the witnesses' testimony. Alas, in most cases, the Ukrainian side provides no assistance, ignoring both the criminal facts and the rights of people enshrined in international treaties.

Such illegal actions will not go unpunished, and sooner or later the perpetrators will be tried for their crimes. And while the Ukrainian authorities and law enforcement agencies ignore criminalization of the citizens' consciousness, the Investigative Committee of Russia will not stay away from the continuing iniquity. The investigators will continue to record evidence of the guilt of everyone involved in crimes against peace and security of mankind, against the Russian citizens. The Department is taking all possible measures to uphold the principle of the inevitability of punishment for those responsible for committing crimes in Donetsk and Lugansk areas. Acting as a guarantor of application of criminal law measures to the perpetrators, the Investigative Committee of Russia will continue to respond to every committed illegal act in proportion to its public danger.

Official Representative of the IC of Russia S. Petrenko. 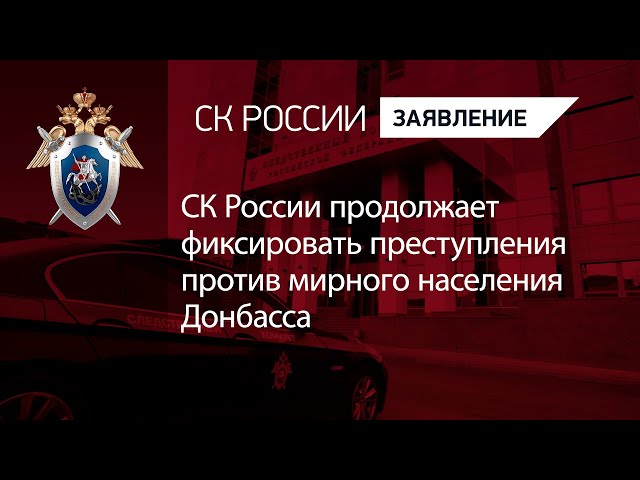