The Chairman of the IC of Russia Holds a Regular Operational Meeting in Mariupol
03 June 2022
12:00
6
print version

The head of the IC was updated on the latest results of the investigation of the crimes committed by the Kiev regime against the peace and security of mankind. Thus, the number of criminal cases initiated since 2014 has exceeded 1030; there are more than 350 targets of an investigation, including representatives of the military and political leadership of Ukraine, members of radical nationalist groups, representatives of military and security services and mercenaries. Investigators keep working with the detained servicemen of the Armed Forces of Ukraine and militants of the Azov nationalist battalion, including those who surrendered from the Azovstal plant, clarify and record the circumstances related to the deployment of AFU units within civilian infrastructure facilities. Investigators ensure fingerprint and genetic information being taken from the detainees in order to identify them. Officers keep a database of call signs and tattoos allowing to identify such persons. A specialized card file has been created and maintained to systematize the information received.

Notably, a significant part of the crimes against civilians has been committed with sheer cynicism. Random passers-by or people who provided medical assistance to wounded relatives or townspeople were subjected to reprisals. After listening to the circumstances of individual crimes, the head of the IC of Russia added that the actions of representatives of the Ukrainian national battalions sometimes exceed the brutality of the Wehrmacht soldiers during the Great Patriotic War. He emphasized the need for a detailed reflection in the case files of the facts that the executors of the orders of the Ukrainian command about shelling and targeted killings of civilians had been well aware of their criminal nature.

During the discussion of actions needed to assess the damage caused by the crimes of the Kiev regime, preliminary data on the consequences in Mariupol were articulated: about 70% of buildings were seriously damaged by Ukrainian armed groups, 20% of the housing stock cannot be restored. In order to assess the damage, satellite images of the city before the attacks began have already been obtained to compare with the consequences of the crimes committed by the Ukrainian military; interaction with representatives of the local administration has been established in order to obtain documents for buildings and urban infrastructure.

Also, forensic investigators of the IC of Russia and experts from the Forensic Expert Center are currently working in Mariupol. Together with investigators, they have formed 16 mobile groups, which begin to inspect facilities using modern forensic technology. It is also planned to increase the number of such groups to 30, which will boost the efficiency of activities aimed at collecting evidence and assessing damage. In turn, the experts outlined a set of necessary materials for research and investigation, and operational procedures. A.I. Bastrykin stressed that this activity should be carried out comprehensively and productively, and the perpetrators must be held accountable in terms of both criminal and financial responsibility.

After listening to the reports, the Chairman of the IC of Russia noted that special attention should be paid to assessing the state of utilities, both in private estates and public areas, since their restoration would also be associated with enormous costs. It is worth involving respective technical experts, whose testimony, along with documentary evidence and expert opinions, will consolidate the evidence base. Criminalists, together with experts, should develop a clear algorithm of actions and identify the primary areas of work, taking into account the interaction with local administrations and agreements concluded with counterparts. 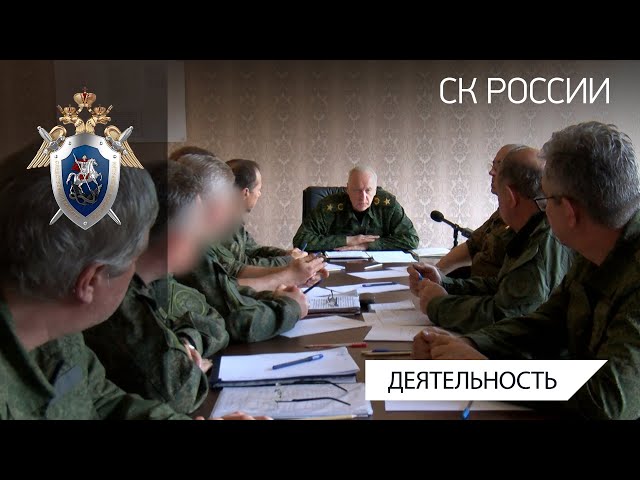