The Investigative Committee of the Russian Federation holds a special event dedicated to the Investigation Officers Day
22 July 2022
18:06
23
print version

Opening the meeting, Mr. AI Bastrykin congratulated everyone, noting that the date of the holiday was chosen for a good reason. On this day, July 25, 1713, a personal decree of Peter I was issued, it was called “On the creation of the investigative office of the guards of Major M.I. Volkonsky”, and in 2022 Russia celebrates the 350th anniversary of the birth of the reformer tsar. Mr. Bastrykin reviewed the convincing results of the work that was carried out in investigating corruption, economic crimes, terrorist and extremist crimes, assaults on juveniles, personal attacks and other crimes. Addressing all the attendants, Mr. A.I. Bastrykin has stressed that the officers of the Russian Investigative Committee are capable of solving crimes of any complexity. He illustrated his statement with specific figures. As an example, in 2021, almost 150,000 crimes were investigated, more than half of these crimes were considered as serious and especially serious crimes. Almost 62 billion rubles were reimbursed to the State and to the victims of crimes during the preliminary investigation and during procedural inspections.

In his report, the Head of the Russian Investigative Committee separately touched upon the work carried out by investigators after the start of the special military operation in Donbas, and he emphasized that the phenomenon of Ukrainian nationalism is a serious threat to Russia and the whole world. “Specialized units of the Main Directorate of the Investigative Committee are engaged in the Donbas today. For that purpose, we have engaged a large group of investigators, forensic experts and criminologists from the Investigative Committee, which is more than 300 officers. 22 officers of military investigative bodies were awarded departmental awards for high performance, dedication, valor and courage shown in life-threatening and health-threatening situations,” the Head of the Committee added. Tremendous work is being carried out to compensate for material damage caused by the armed formations of Ukraine in Donbas.

He stressed that the Investigative Committee considers it its duty to investigate crimes and to provide assistance to the wounded and relatives of those who died. On the territory of Russia, Officers of our department work with refugees, they assist in emergency assistance and in the treatment of wounded children. Besides, Officers of the department visit military hospitals with their traveling performances for wounded soldiers. In addition, the Head of the Russian Investigative Committee announced the third working semester for students of educational institutions of the Russian IC - our young people help in military hospitals during the summer, they support wounded soldiers and their relatives.

The participants of the event remembered those who stood at the origins of the creation of the Body: Mr. Anatoly Pavlovich Korotkov, Mr. Mikhail Georgievich Yadrov, Mr. Yuri Ivanovich Lekanov, Mr. Vladimir Ivanovich Markin.

The participants in the event also recalled the officers of the Investigative Committee who died in the line of duty - these are 13 of our comrades who remained faithful to the oath to the end.

It was noted that deputy commander of a reconnaissance company, a paratrooper lieutenant Georgy Alexandrovich Dudorov fell to the death of the brave in the Donbass, he was a graduate of the Moscow Cadet Corps named after Alexander Nevsky of the Investigative Committee,  and also Colonel of Justice Sergey Nikolaevich Krasnikov, who died of the brave in the Donbas, he was a former officer of the Main Directorate. Today, their relatives were present in the event, so the Head of the Investigative Committee of Russia expressed his condolences and gratitude for the feat of their relatives to them once again.

Mr. A.I. Bastrykin also noted that among those who died in Donbass there are friends and associates of the Russian Investigative Committee, there are representatives of the Ministry of Defense: Deputy Commander of the Black Sea Fleet, Captain 1st Rank Andrey Nikolayevich Paliy, Commander of the Marine Brigade of the Black Sea Fleet of the Guard, Colonel Alexei Nikolayevich Sharov, Commander of Volgogradskaya 20 1st Guards Motorized Rifle Division, Guards Colonel Aleksey Nikolaevich Gorobets. They did a lot to support the formation of the cadet corps of the Russian IC, they did a lot in relation to work with youth, and they will be remembered by everyone as professionals and true patriots of the Fatherland.

Mr. A.I. Bastrykin proposed to honor the memory of the dead with a minute of silence.

Separate words of gratitude were addressed to the veterans of the investigation. Issues of continuity of generations and training of future investigators were also touched upon. In this regard, the Head of the Investigative Committee of Russia dwelled in detail on the development of the system of educational institutions of the department, in which there are two academies, 5 cadet corps, and there are more than 100 cadet classes in different cities of Russia.

Concluding his speech, Mr. A.I. Bastrykin said: “Serving in the Investigative Committee is not an easy choice, but it is a choice of responsible work, which requires professionalism, determination, endurance, and often it also requires courage in the fight against crime, in order to maintain public safety and law and order.”

Concluding the event, Mr. A.I. Bastrykin once again congratulated everyone on the upcoming professional holiday, noting that we should all be united in this difficult time for the country. He remonded that the officer uniform is an example of valor, justice and determination.

In the final part of the event, musical greetings were performed by the famous singers such as Lev Leshchenko, Igor Dzreev, Alexander Marshal, Soso Pavliashvili, Vladimir Vinokur and the Kuban Cossack Choir. The Chairman of the Russian Investigative Committee thanked the artists for the kind words and the wonderful concert that they presented to the officers. 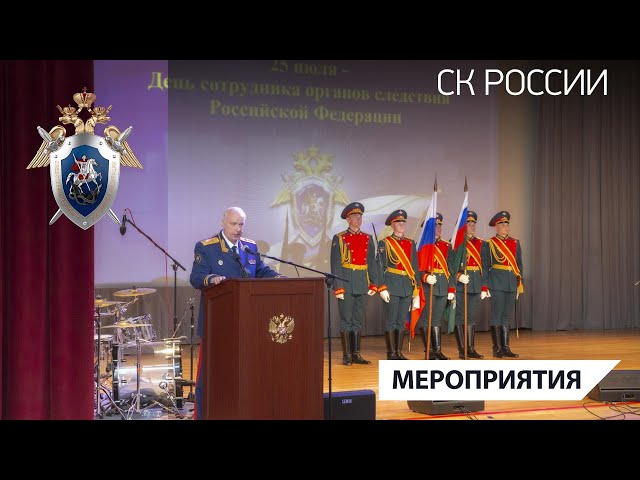