Mr. Alexander Ivanovich Bastrykin, Chairman of the Investigative Committee of the Russian Federation, within his working trip to the Syrian Arab Republic, held talks with the Head of the National Security Bureau of the State, Mr. Ali Mamluk, and the Minister of Justice of Syria, Mr. Ahmed Al-Seyid, with the participation and support of Mr. Alexander Vladimirovich Efimov, Special Representative of the President of the Russian Federation for the Development of Relations with the Syrian Arab Republic, Ambassador Extraordinary and Plenipotentiary of the Russian Federation to the Syrian Arab Republic. The delegation of the Russian Investigative Officers also included Mr. Eduard Valeryevich Kaburneev, First Deputy Chairman of the Investigative Committee of Russia, Heads and Officers of Divisions of the Main Directorate of the Department. The negotiators discussed the results of joint work in a number of areas of bilateral cooperation, as well as outstanding issues of further cooperation.

The meeting participants discussed the importance of the treaties signed in June this year between the Russian Federation and the Syrian Arab Republic on extradition and mutual legal assistance in criminal matters, which are currently under ratification. It was noted that the application of these agreements would help to increase the effectiveness of cooperation between Russian and Syrian law enforcement agencies in the field of criminal justice.

The Head of the Russian Investigative Committee discussed with Mr. Ali Mamluk and Mr. Ahmed Al-Seyid the issues of cooperation in identifying and prosecuting terrorists, as well as the search for defendants in criminal cases from among Russian citizens who left for Syria to participate in the activities of terrorist organizations.

Mr. A.I. Bastrykin expressed his gratitude to his colleagues for the high-quality execution by the Syrian side of the department's requests for legal assistance, as well as continuous assistance in identifying persons involved in terrorism. The Chairman of the Russian Investigative Committee added that the data obtained allowed the investigation to bring charges in absentia in a number of criminal cases to more than thirty terrorists and members of illegal armed groups, to obtain an arrest warrant and put them on the international wanted list.

The parties expressed their readiness to continue joint work and supported the agreements on further joint activities to neutralize emerging threats. At the end of the meeting, the Chairman of the Russian Investigative Committee presented departmental awards to colleagues from Syria - medals "For commitment to official duty" and "For distinguished service".

During the working trip, Mr. A.I. Bastrykin listened to reports on the progress of the investigation of specific crimes committed by illegal gangs against the Russian military, including aircrew.

The Head of the Department thanked his subordinates for their effective work in difficult conditions, noting the efforts of our military personnel, thanks to which the investigators effectively carry out the tasks assigned to the Russian Investigative Committee. Mr. A.I. Bastrykin presented departmental medals "For Merit", "Valour and Courage". Separate words of gratitude were addressed to the Employees of the Russian Embassy for their constant assistance and their help in organizing the work of investigators.

At the Russian air base named Khmeimim, Mr. A.I. Bastrykin and the members of the department's delegation laid flowers at the memorial to the fallen Russian servicemen in Syria and visited the military site Chapel. 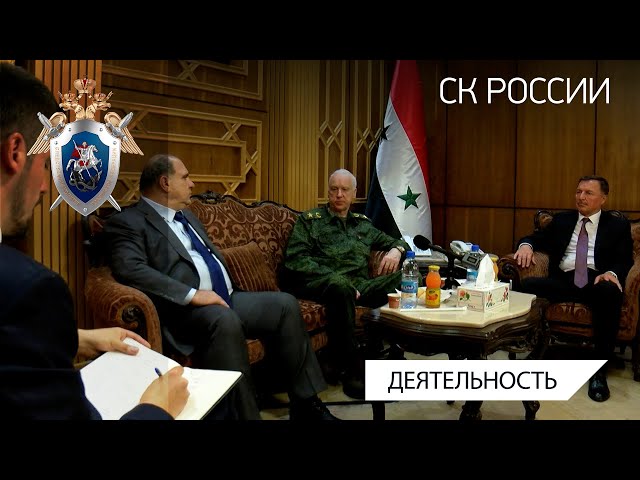