The Chairman of the IC of Russia takes part in the International Scientific and Practical Forum "Without a statute of limitations" in Gatchina
21 November 2022
15:10
11
print version

Mr. Alexander Ivanovich Bastrykin, Chairman of the Investigative Committee of Russia, took part in the International Scientific and Practical Forum "Without a statute of limitations. The genocide of the Soviet people by the Nazis and their collaborators during the Great Patriotic War: historical reflection and judicial practice." The event takes place in the Gatchina city, Leningrad Oblast, occupied during the Great Patriotic War and which has become a place of national memory.

Within the forum, a memorial stone was unveiled in Gatchina's "Sylvia" Park in memory of civilians and prisoners of war brutally murdered by German punishers. The ceremony was attended by Mr. S.T. Sazin, Head of the Investigative Directorate of the IC of Russia for Leningrad Oblast and Mr. V.V. Loboda, Acting Rector of the St. Petersburg Academy of the Investigative Committee of Russia, as well as students of Departmental Educational Institutions.

Turning to historical facts, the Chairman of the Investigative Committee of Russia recalled that 80 years ago, an Extraordinary State Commission was established in the USSR to reveal and investigate the atrocities of the Nazi invaders. Its members included well-known scientists and authoritative public figures. The files arranged by the Commission were subsequently used during open trials against the Nazis and their collaborators, as well as during the Nuremberg Tribunal, the decision of which was a triumph of integrity and professionalism of outstanding Soviet Lawyers. At the same time, not all criminals were convicted in the post-war trials. Mr. A.I. Bastrykin added that this is the reason why the Investigative Committee of Russia continues to detect all the circumstances of the crimes committed and identify the persons involved, carefully studying archival data and eyewitness accounts, implementing the principle of the inevitability of punishment.

The work of their predecessors is continued by Investigators of the Investigative Committee of Russia, specially created in the Main Investigative Directorate - the Directorate for the war crimes investigation, genocide and the rehabilitation of Nazism. Currently, 22 criminal cases on the genocide of civilians in Volgograd, Novgorod, Leningrad, Oryol, Pskov, Rostov and Smolensk Oblasts, Krasnodar, Stavropol Krais, Crimea and other regions occupied during the Great Patriotic War are connected in one proceeding. In these subjects of the Russian Investigative Committee, together with volunteers, search and archival work is carried out. Activities are also continuing to identify previously unexplored sites of mass graves of civilians.

Investigators have already interrogated almost four thousand people - former prisoners of concentration and transit camps. "Only this year, based on the documents we collected, the courts of Oryol, Rostov, Bryansk, Leningrad Oblasts, the Republic of Crimea, Krasnodar Krai and the city of St. Petersburg established the legal facts of the genocide of the population of these regions during the years of occupation," stressed Mr. A.I. Bastrykin. He noted that the decision to recognize the blockade of Leningrad during the Great Patriotic War as a war crime, and a crime against humanity and genocide of the peoples of the Soviet Union was a landmark. The plan of destruction by starvation was part of the general concept of "war of annihilation" developed by Hitler and his military leaders. In the implementation of this plan on the territory of Leningrad, not only the troops of Nazi Germany were involved, but also armed units formed on the territories of Belgium, Italy, Spain, the Netherlands, Norway and Finland, as well as individual volunteers from among the Austrians, Latvians, Poles, French and Czechs. The Chairman of the Russian Investigative Committee added that today foreign mercenaries are involved in the destruction of the Russian world, as it was back to the Great Patriotic War.

Mr. A.I. Bastrykin singled out another important aspect of the Department's activities. The Investigative Committee is actively involved in providing assistance to refugees from the territories of hostilities. The Department pays special attention to children, including orphans.

Concluding the speech, Mr. A.I. Bastrykin emphasized: "Our common duty is not just to honor the memory of those who died for freedom and peace on Earth, but to defend the just cause for which they fought and gave their lives; and today we must put all our efforts to that."

Within the event, guests will be presented with a cycle of documentary projects "Without a statute of limitations", as well as short movies about the Nazi occupation of different regions during the Great Patriotic War. The documentaries were produced with the participation and support of the Investigative Committee of Russia based on true events, and the scripts were developed using files, which are the basis of the evidence in criminal investigations. 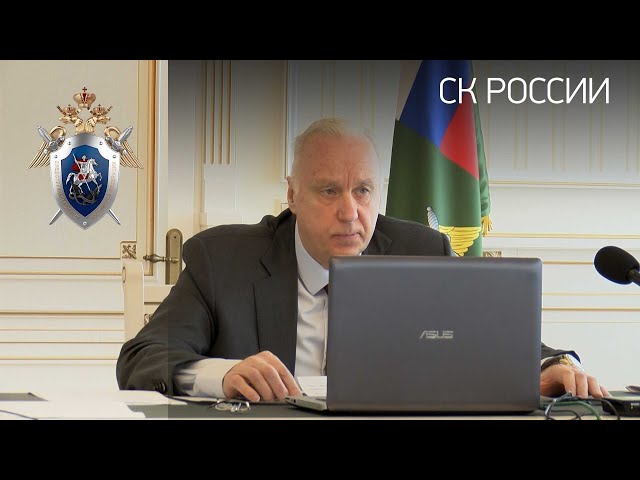