Charges are brought against 18 people as part of a criminal case into mass poisoning by surrogate alcohol in the Orenburg region
26 November 2021
09:14
1
print version

The Main Investigation Department of the Investigative Committee of the Russian Federation continues to investigate the probes into mass poisoning by surrogate alcohol in the Orenburg region.

The emergency event affected 64 residents, including 34 fatalities, in 7 communities in the Orenburg region between 6 and 18 October 2021.

18 persons were charged under Articles 238, 171.1, 171.3 of the Criminal Code of Russia (production, storage and sale of goods that do not meet safety requirements; unlabelled, illegal production of alcoholic beverages), depending on their role. Three of the defendants were placed under house arrest and banned from certain activities, while the remaining citizens were remanded in custody. Among others, a 29-year-old resident of Orsk has been detained on suspicion of involvement in the crime and charged with the storage and sale of dangerous methyl-containing products to individual entrepreneurs and citizens. He pleaded guilty to the incriminated offences in full and gave detailed testimony in which he described the accomplices who had supplied the products wholesale. They were detained and have been subjected to preventive detention. In addition, 14 more residents of Orenburg Oblast were charged with the production, storage and sale of methyl alcohol under the guise of alcoholic beverages, who had purchased and delivered dangerous alcoholic beverages to regional shops for sale.

As part of the investigation, the storage facilities in Orsk where the methyl-containing products were bottled and stored, as well as all the retail outlets where they were sold to the victims, were identified.

During searches of the storage, bottling and sales premises 11 barrels of methyl alcohol of 216 l each, more than 1600 glass and plastic bottles of 0.5 l with alcoholic beverages unlabelled and empty containers were seized.

Organisations involved in the wholesale distribution of methyl-containing products, the actions of controlling and law-enforcement officers are currently being checked. The criminal investigation is ongoing. 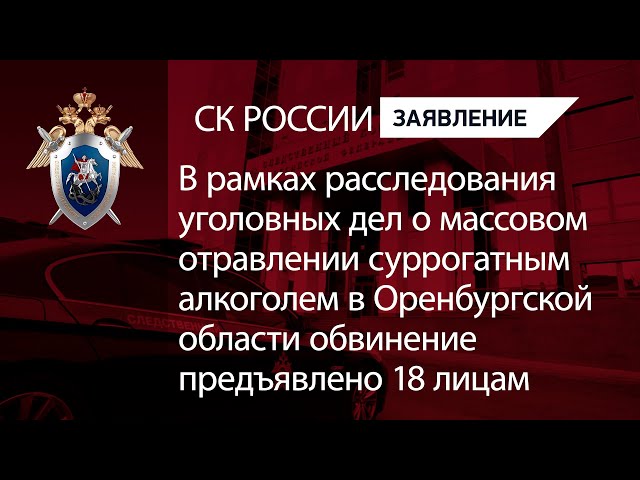