Chairman of the Investigative Committee of Russia briefs a meeting in Mariupol
27 May 2022
13:20
7
print version

The Head of the Directorate noted that there was catastrophic destruction of residential buildings, children's and sports facilities and other civilian infrastructure facilities in Mariupol. The actions of the Ukrainian regime against its people are a grave tragedy. Significant damage is obvious, which must be assessed and reflected in the civil claims of the victims, exercising their legal rights. The perpetrators must be criminally and materially liable. In this regard, the Chairman of the Russian Investigative Committee noted the relevance of time-issue in appraisal, construction and economic examinations. He also instructed to draw up a work plan as soon as possible, and to involve the forensic specialists from Main Directorate and from the Forensic Expert Center of the Russian Investigative Committee.

It was noted that the active work on documenting the crimes continues. More than 1,000 criminal cases have been launched and are being investigated. It was reported about the ongoing work with the detained members of the Ukrainian armed forces and the finilized criminal cases, including the new identified persons of interest. Thus, the names of persons from the senior staff of the pre-trial detention centers in Kyiv, Poltava, Nikolaev, Kharkov, Vinnitsa, Dnepropetrovsk and Sumy are known, where Russian prisoners of war were tortured. In addition, interrogations of surrendered Ukrainian nationalists confirmed once again, that since the beginning of the special military operation, Ukrainian security forces have been deployed in firing positions equipped on civilian infrastructure, houses, schools, and kindergartens. It was noted that Nazi atrocities against civilians were often caused by taking chemical substances to boost morale. In this regard, the IC Head instructed to examine these substances and give a proper legal assessment of this information within the investigation.

The Chairman of the Investigative Committee also outlined the key areas for future work. Among them were the complex interaction between law enforcement agencies and other bodies, increasing the pace of interrogations, conducting the necessary forensic examinations, collecting evidence, further expanding the circle of defendants in order to ensure the inevitability of punishment for crimes committed. A.I. Bastrykin also named the priority tasks - the need for the most rapid significant investigative information exchange and verification, proper criminal acts documenting of the already identified persons, a comprehensive investigation of their crimes for subsequent trial. It is necessary to step up efforts to establish the identity of people, who surrendered, and the military personnel identification of the 36th separate marine brigade of the Armed Forces of Ukraine and the Azov militants in Mariupol, to identify their status, and to look into their possible involvement in crimes against civilians and violations of international humanitarian law.

The Head of the Investigative Committee of Russia stressed that it was necessary to continue developing cooperation in comprehensive assistance to refugees who have arrived on the territory of the Russian Federation, including procedures for locating the relatives whose contacts has been lost, to search and to restore the necessary documents, to organize treatment and assistance in resolving other pressing issues. «Based on the data collected, our citizens, and especially the young people, should be actively told about the serious work that is being done to protect Donbass, the security of the Russian Federation and civilians. Based on verified information, it is necessary to work to eradicate the ideas of neo-Nazism in all forms of its manifestation. The new generation should see the objective information and be aware of the inevitability of punishment for every supporter of a misanthropic ideology. The upbringing of conscious patriotism and the formation of a sense of pride in belonging to the Russian state should become the main idea for the development of society in modern conditions,” added A.I. Bastrykin.

In conclusion, the Head of the Russian Investigative Committee reminded once again of the need for further comprehensive cooperation with the LPR and DPR colleagues from within the existing agreements, including in matters of prompt finalization of the investigation and subsequent submittal to court for being trailed on the merits. The Head of the Committee again emphasized the expediency of the cases being trailed in the republics, since the crimes were committed on their territories.

At the end, A.I. Bastrykin awarded the military investigators of the Russian Investigative Committee with the departmental medals, noting their contribution to the implementation of an important and responsible mission to investigate the crimes of the Kyiv regime against civilians. “Officers, I understand that this is a difficult work, but it is a filigree work worthy of the Investigative Committee level,” he concluded, wishing the officers success in their duty. 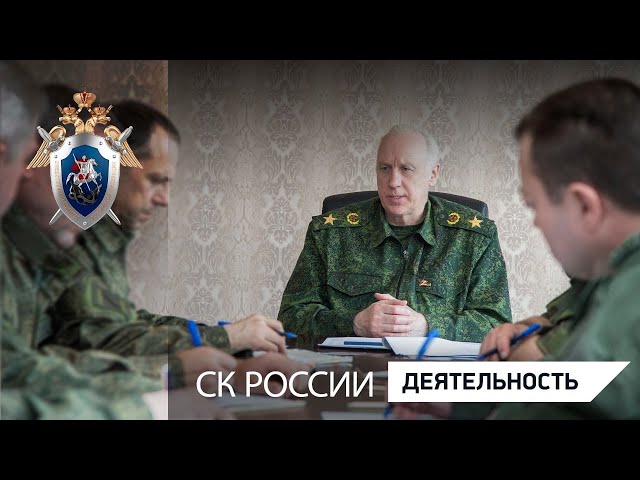