The Chairman of the IC of Russia Holds a Regular Operational Meeting in Mariupol
09 June 2022
13:55
4
print version

The head of the IC was updated on the latest results of the investigation of the crimes committed by the Kiev regime against the peace and security of mankind. In total, over 1,100 criminal cases have been initiated and are ongoing to date. The number of affected persons is constantly growing: for the time being, more than 75,000 people have been interrogated and recognized as victims, including about 13,000 minors.

Investigators continue to identify the surrendered servicemen of the Armed Forces of Ukraine and nationalists, including those from the Azovstal plant. Such persons – among them over 200 officers – are being interrogated.

In cooperation with the FSB and the Federal Penitentiary Service of Russia, new individuals were identified who had been involved in the brutal murders of civilians, including women and children, in Mariupol. These are Valentin Vasilenko, a serviceman of the military unit A-1965 of the 501st separate battalion of the Marine Corps; Senior Lieutenant Vladislav Stryukov, the commander of the reconnaissance company of the 36th Marine Brigade; his subordinate Artem Buchkovsky; Yaroslav Ivasev, a serviceman of the same Marine Brigade. Criminal cases have been initiated over all these facts, and the cases are being investigated.

With the participation of a victim, investigative actions were carried out with  Dmytro Evgan, a soldier of the 36th brigade, in the case of ill-treatment of a captured DPR army soldier. Despite numerous injuries, the DPR serviceman survived and his testimony, together with other evidence, makes it possible to expose the person involved in the crime. The results of a forensic medical examination are expected, other procedural actions aimed at completing the investigation are being carried out.

A criminal case on charges of Vasily Shitrya, a soldier of the 23rd separate motorized infantry battalion, accused of ill-treatment of the civilian population, was forwarded to the General Prosecutor's Office of the DPR for further transfer to the judicial authorities. Vasily Shitrya participated in the execution of civilians. In addition, investigative actions have been completed in 17 criminal cases against Ukrainian servicemen and nationalists. Five more criminal cases initiated against five commanders are at the final stage of investigation.

The Chairman of the Russian Investigative Committee was informed that a cache of electronic information carriers, including mobile phones, which the surrendered nationalists intended to transfer to the territory of Ukraine, had been discovered within the framework of investigative actions. It is already known that the devices contain personal data, photographs and other materials with Nazi symbols, as well as other information of interest to the investigation. Investigators continue their operations with these data carriers.

In order to quickly asses the damage, 30 mobile groups have been established and began to inspect objects. These groups include investigators, specialists from the Criminalistics Center of the IC of Russia and experts from the Forensic Expert Center of the Investigative Committee. An interactive map of the city of Mariupol has been created, which will allow structuring and speeding up the assessment process. Modern forensic technique is applied. All social facilities, including educational and medical institutions, have already been inspected. The groups began sectoral inspection of the entire city.

Summing up the meeting, the head of the IC of Russia stressed the need to increase the pace in conducting expert research and recording evidence of the crimes committed by the Kiev regime overall. A.I. Bastrykin noted that the inspection methodology should be reconsidered to ensure the completeness of the assessment of the damage caused by the Ukrainian side and the prompt resolution of issues and questions of experts that are important for the investigation. Summing up the meeting, the head of the IC thanked his subordinates for the humanitarian assistance provided to the residents of Donbass, noted the importance and significance of such activities in supporting people. 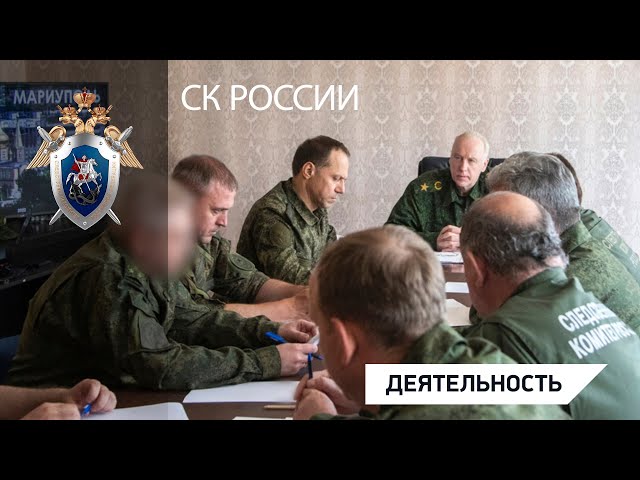