The Chairman of the Investigative Committee of Russia takes part in the special event of the Boarding School dedicated to the Day of Knowledge
01 September 2022
16:00
10
print version

The event was attended by Ms. Elena Yurievna Garanina, acting Pricipal of the institution, Ms. Maria Dmitrievna Krasnopeeva, Head of the Cultural Center of the Russian Investigative Committee, students and their parents.

At the beginning of the event, the ceremony of introducing the flag of the Russian Federation took place, and then the vocal ensemble of the Boarding House "Devchata" (The Girls) performed the Russian anthem.

The Chairman of the Russian Investigative Committee and other guests of honor laid flowers at the memorial plaque dedicated to Mr. Igor Borisovich Filin, who died in the line of military duty in Afghanistan in 1985 and was posthumously awarded the Order of the Red Star. Mr. I.B. Filin studied at school No. 216, which was previously located in this building. Students honor the feat of a brave hero, who became an example model of courage and selflessness for them.

Mr. A.I. Bastrykin congratulated students and teachers on the beginning of the new academic year, on the Day of Knowledge. He noted that the Boading School has excellent conditions for work and study. The Management Authorities of the Department pay great attention to the development of the educational system, where the boarding school is now a constituent part. "A lot has been done in a short time. You worthily continue to strengthen the traditions of the "Smolyanka" - pupils of the Smolny Institute for Noble Maidens. Excellent teachers, educators and girls live and work here, and created a really cozy atmosphere." The Head of the department also thanked the pupils for participating in the working semester this summer, where they and other students of educational institutions of the Russian Investigative Committee, helped in hospitals and took cared for patients.

Mr. A.I. Bastrykin especially greeted the new students of the Boarding School from Donbas, expressing the hope that in future they would become students of departmental academies. He also assured the guys that the Investigative Committee fundamentally investigates the crimes of Ukrainian nationalists against the civilian population of Donbas and Ukraine, and all responsible persons would be prosecuted and punished.

Ms. E.Yu. Garanina made a welcoming speech. “Whatever you choose to become in the future, I am sure that in your hearts you will carry that friendship, that mutual understanding and many other things, that you will develop within the walls of the Boarding House. I believe that each of you will find the right path in life,” said Ms. Elena Yurievna.

The Chairman of the Russian Investigative Committee congratulated Ms. E.Yu. Garanina with her birthday, thanking her for the colossal work done at the Boarding School and wished her new achievements in her service.

Mr. A.I. Bastrykin presented certificates of honor to the winners of the educational projects "My future profession is an investigator" and "Peter's Personality in the History of the Russian State" (dedicated to the 350th anniversary of the birth of the Emperor). He recalled that he was the reformer tsar who laid the foundation for the formation of preliminary investigation bodies in Russia.

At the end of the celebration, a bell sounded, symbolizing the beginning of a new academic year. Pupils of the boarding school read poems and sang patriotic songs. In addition, the girls presented Mr. A.I. Bastrykin a wooden panel depicting the coat of arms of the Investigative Committee of Russia, which they made with their own hands. 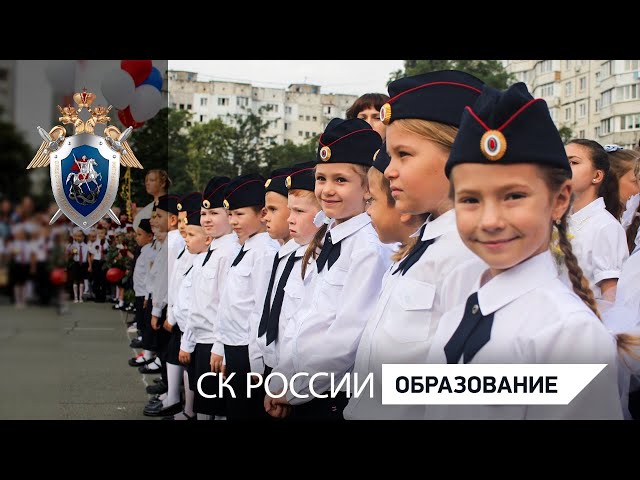