In a conversation with representatives of the competent authorities they noted the effectiveness and efficiency of agreements previously concluded between the structures of the two states, as well as the serious successes in combating the terrorist threat. The Chairman of the Investigative Committee of Russia assured that the Russian investigation "within its competence and in close cooperation with the Syrian special services and law enforcement agencies will certainly continue to provide comprehensive assistance in suppressing terrorist activity and bringing terrorists to criminal responsibility".

Ali Mamluk handed the Chairman of the Investigative Committee a number of documents necessary for the investigation, which will allow significant progress in the investigation of crimes of a terrorist nature. A.I. Bastrykin expressed his colleagues' gratitude for the high-quality execution by the Syrian side of the Investigative Committee's requests for legal assistance, as well as continuous assistance in identifying persons involved in terrorism. "The identifying information obtained is very important because it allows the investigation to move forward, including declaring them internationally wanted," he added.

At the same time, the head of the Russian Investigative Committee discussed with Ali Mamluk and Ahmed Al-Sayyid the range of background information required by the investigation and the possibility of involving employees of relevant Syrian agencies in the monitoring work. Increased cooperation in this area will help identify and prosecute those involved in terrorist activities.

In addition, they discussed cooperation in the search for persons involved in criminal cases from among Russian citizens who went to Syria to participate in the activities of terrorist organizations, as well as on the fact of the unknown disappearance of their relatives who had left with them.

In addition, the scientific and educational sphere was discussed. Increasing the level of training of qualified, legally literate specialists is a significant contribution to the normalization of lawmaking and law enforcement processes in Syria.

The parties expressed their readiness to continue working together to strengthen the rule of law in the republic. Both sides supported agreements on further cooperation in order to avoid escalation of tensions in the region.

At the Russian airbase Khmeimim, A.I. Bastrykin and other departmental officials laid flowers at the monument to pilot O.A. Peshkov, who died in Syria during a combat mission, honoring the memory of the Hero of Russia. Then the Chairman of the Investigative Committee heard reports from subordinates on the progress of the investigation of specific crimes committed against the Russian military. The investigators also reported on the support provided to orphans in Syria, whose parents were killed in action. The chairman of the Investigative Committee thanked the subordinates for their effective work in difficult conditions and their not indifferent attitude. He especially mentioned the efforts of the Russian military personnel, through which the investigators successfully carry out the tasks assigned to the Investigative Committee. He also expressed his gratitude to the staff of the Russian Embassy for their constant assistance and help in organizing the work of investigators away from their homeland.

Also, the Russian delegation, through the administration of the President of the Syrian Arab Republic, handed over humanitarian aid for Syrian children who were left without parental warmth as a result of military operations. Officers of the Russian IC Russia together with the Artek ICC collected school supplies, books and textbooks on the Russian language studied in educational institutions of the republic, national sweets and New Year presents. In many families, fathers were killed by terrorists and relatives are still in the ranks of government troops, and such support is especially valuable. 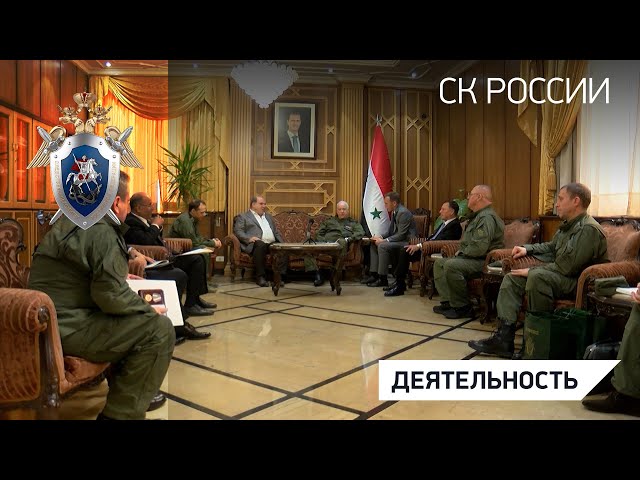