The Chairman of the Investigative Committee of Russia gives a lecture to MGIMO students
14 November 2022
19:27
6
print version

Mr. Alexander Ivanovich Bastrykin, Chairman of the Investigative Committee of the Russian Federation, Doctor of Law, Professor delivered a lecture for MGIMO (Institute of International Studies of the Moscow State Institute for International Relations) students - participants of the "Parliamentary Model 2022", dedicated to the activities of the Investigative Committee of Russia in the context of exacerbation of international relations.

Mr. Anatoly Vasilyevich Torkunov, Rector of MGIMO, thanked Mr. Alexander Ivanovich Bastrykin for his cooperation, emphasizing that the lectures of the Chairman of the Investigative Committee have already become a good tradition.

Mr. Alexander Ivanovich Bastrykin also expressed his gratitude to Mr. Anatoly Vasilyevich for fruitful cooperation during many years, noting that MGIMO has established itself as a popular platform for discussing and developing strategic decisions related to the protection of our country from internal and external threats.

Within the bounds of meeting, the Head of the Russian Investigative Committee told the students about the historical prerequisites for the formation of the Department, its place and role in the system of State Bodies, tasks and main areas of activity, noting independence as the basis for the special legal status of the Russian IC.

Mr. A.I. Bastrykin stressed that investigation of serious and especially serious crimes is still among the priorities of the Department, it also includes criminal investigations of past, protection of the interests of juveniles and other socially unprotected segments of the population, combating manifestations of extremism and terrorism, countering corruption, investigation of tax crimes, and he gave results-based of work in these areas.

Mr. A.I. Bastrykin shared the results of his work with future lawyers on the investigation of crimes committed by the Kiev regime, which are the subject to the public attention nowadays. The Head of the Department noted the cruelty, inhumanity of the actions of the Ukrainian military and nationalists and gave examples from the files of criminal cases.

The Chairman of the Investigative Committee said that investigators carefully document every fact of the criminal activity of the Military Formations of Ukraine against the civilian population and Russian military personnel, and a lot of work has already been done. Thus, since 2014, more than 2,000 criminal cases have already been launched, including the ones against the representatives of the military and political leadership of Ukraine, members of radical nationalist associations, as well as representatives of Ukrainian Law Enforcement Agencies, over 240 thousand people have been interrogated over the entire period of the investigation.

At the end of the meeting, the students thanked the Head of the Investigative Committee for the informative and relevant lecture, and they also asked questions of interest to them. In turn, Mr. A.I. Bastrykin wished future lawyers success in their studies, noting the need for constant self-improvement and development of such qualities as responsibility and indifference, due to them being necessary for the profession. 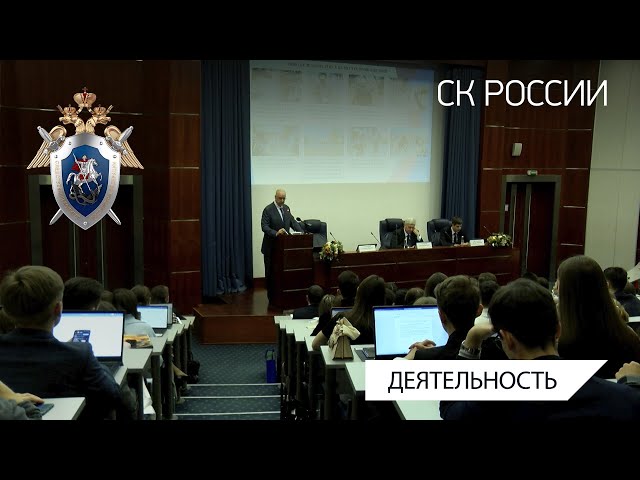