Speaking at the meeting, Chairman of the Investigative Committee of Russia A. I. Bastrykin stressed that modern challenges and social processes in the country and the world, as well as new illegal activity methods, received a natural reaction. He noted that in 2021, the investigative authorities filed over 90 thousand criminal cases for trial, including over 9 thousand on corruption-related crimes. 941 persons with a special legal status have been brought to criminal responsibility, including 429 for committing corruption crimes. 16.5 thousand cases on economic crimes were filed for trial. More than 2 thousand crimes committed by organized criminal groups were investigated.

The head of the department noted the investigators' achievements in protecting the interests of citizens in socially significant areas. In particular, 762 cases of non-payment of wages, 30 cases of criminal fraud in the field of shared-equity construction, and 82 cases of crimes committed in the course of providing orphans with housing have been solved and filed for trial.

Significant successes were achieved in terms of compensation of damages. RUB 62 billion were compensated to the state, citizens, and organizations during the preliminary investigation and pre-investigation checks, which is 18% more than in 2020.

The Chairman of the IC of Russia positively noted the work on solving and investigating the crimes committed in the past years. Due to the analytical abilities of the staff, achievements of forensic experts, and modern examinations, it was possible to solve about 7 thousand crimes of the past years, including 768 murders.

A. I. Bastrykin drew the heads' attention to the need to counter cybercrime in modern conditions, taking into account the growing number of attacks on Russian websites.  The units created specifically for investigating such crimes have proved themselves well. Last year, over 12 thousand acts committed with the use of computer technology were investigated. At the same time, the Chairman of the Investigative Committee stressed that the department urgently needed more advanced practice-oriented methods and technologies to counter cybercrime. They are already being developed by a specially created department at the Moscow Academy of the IC of Russia. In the future, the methods will be studied by employees of the department as part of professional development in this area.

The data on juvenile delinquency were reported at the meeting – in 2021, 14,072 crimes committed by minors were investigated. Almost 23 thousand criminal acts against minors were investigated, as well as 518 acts committed in the past years. As a result of joint actions of law enforcement authorities, 10,779 children were found after reports of their disappearance, including children who disappeared in previous years. The Chairman pointed out to his subordinates the need to intensify the work on protection of minors from criminal actions and prevention of juvenile delinquency.

Separately, A. I. Bastrykin discussed the investigators' work in connection with the events in Ukraine, reminding that for several years the Kyiv authorities and nationalist groups had been committing particularly serious crimes against the population of Donbass. In this regard, since 2014, the Investigative Committee has initiated 512 criminal cases, including against representatives of the military and political leadership of Ukraine, members of radical nationalist groups, as well as of law enforcement agencies staff. 180 persons have been brought to criminal responsibility. The head of the department instructed to prepare the necessary departmental agreements with the relevant authorities of the DPR and LPR. He also noted that in the regions it was important to participate in full-scale support of the arriving refugees, solving social and household support issues and providing qualified legal assistance. If people have any significant information about illegal actions of the Ukrainian military forces, including evidence of the genocide of civilians, such information will be documented within the criminal case. This is required to bring the perpetrators to justice. Among those who arrived from the territory of the DPR and LPR, there are 8,347 minors, including 1,174 orphans, as well as over 3,000 elderly people. The Investigative Committee, in cooperation with relevant departments, is solving the issues of arranging rehabilitation for children of Donbass, their treatment with the help of the Research Institute of Emergency Pediatric Surgery and Traumatology of the Moscow Healthcare Department, as well as entering the educational institutions.

The Chairman of the IC of Russia heard out the heads of a number of investigative departments, where shortcomings in certain areas were found at the end of the year. The reports were presented by the Head of the Investigative Department for Ivanovo Oblast V. V. Samodaykin, for Ryazan Oblast V. A. Nikeshkin, for the Republic of North Ossetia – Alania V. Kh. Ustov and for Tambov Oblast A. N. Polshakov.

The board awarded state and departmental awards to the department staff for service achievements. In particular, medals of the Order “For Merit to the Fatherland” of I and II class, the honorary title “Merited Employee of the Investigative Authorities of the Russian Federation,” commendations of the President of the Russian Federation were awarded to a number of heads and employees of the Main Military Investigative Department, the Main Investigative Department, and the Main Forensics Department of the IC of Russia.

Summing up the results of the event, the Chairman of the IC of Russia instructed his subordinates to intensify the work on compensation for damages caused by crimes through seeking its real repayment at the pre-trial stage, as well as to improve the effectiveness and quality of investigations. Investigative departments must provide immediate response to manifestations of extremism, primarily among migrants. They must take measures to solve crimes, including those committed in previous years. In terms of crime prevention, the investigative authorities aim to eliminate the real circumstances that contributed to breaking the law. Overall, summing up the results of 2021, the head of the department spoke highly of the Investigative Committee units' work, noting that “in this difficult time, both in words and in deeds, we must walk in line with the defenders of the Fatherland.” 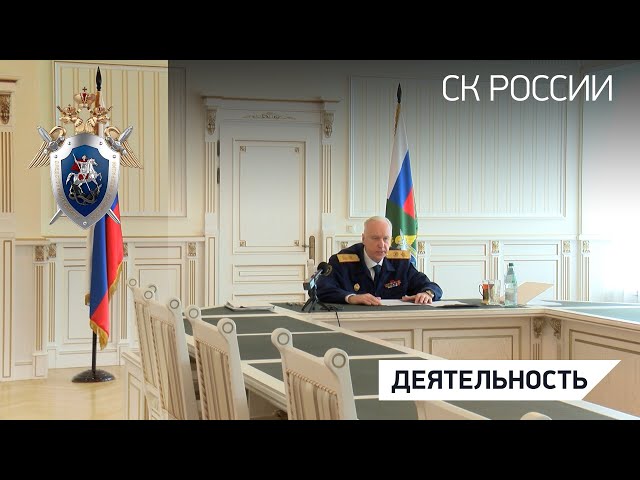