The Investigative Committee of Russia is finalizing the investigation of several criminal cases against the Ukrainian commanders accused of killing civilians in Donbass and destroying civilian infrastructure
07 May 2022
14:35
1
print version

The Investigative Committee of Russia is completing the investigation of a number of criminal cases against the Ukrainian servicemen and commanders of the Armed Forces of Ukraine accused of committing crimes against the peace and security of mankind.

These criminal cases will be transferred to the prosecutor's offices of the DPR and LPR for subsequent trial of the accused in the Donetsk and Luhansk People's Republics, in accordance with the agreements on cooperation and legal assistance concluded by the Investigative Committee of Russia. This approach, of course, meets the basic principles of criminal procedure law on the criminal cases being trailed at the scene of the crime, and this will allow the people's republics courts to examine the evidence as openly, fully and objectively as possible in order to adjudicate the verdict to the Kyiv regime criminals.

For 8 years, the Investigative Committee of Russia has been investigating criminal cases against Ukrainian security forces and representatives of nationalist armed groups. These persons are involved in the commission of serious and very serious crimes, such as genocide, ill-treatment of the civilian persons and the use of banned means and methods of warfare, murder, kidnapping, torture, hostage-taking, and others.

In connection with the Donetsk and Lugansk People's Republics recognition by the Russian Federation and the conclusion of cooperation agreements with their law enforcement agencies, the efficiency of collecting evidence in these criminal cases has increased significantly, and this allows promoting the process of criminal’s identification. The work of the Russian operational services, as well as the work of the Russian Ministry of Defense, undoubtedly has an important impact. Every day we receive more and more evidence of the Ukrainian regime crimes. This includes material evidence, and the testimony of thousands of witnesses, victims, as well as surrendered Ukrainian military and nationalists, forensic reports and other data.

Currently, Russian investigators are investigating about 800 criminal cases. Today, the  total amount of the collected information allowed the Investigative Committee of the Russian Federation to identify about 300 specific names of Ukrainian military personnel and militants of the national battalions responsible for crimes against civilians. All of them, including others, who committed the crimes against the peace and security of mankind, will be prosecuted sooner or later. 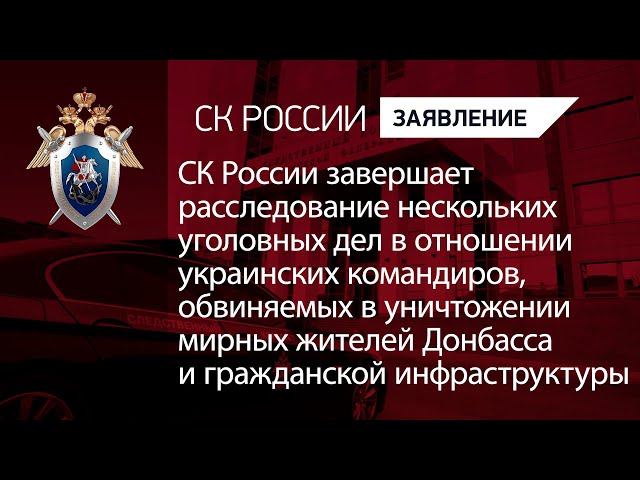