The Chairman of the Investigative Committee of Russia holds a brief meeting in Novaya Kakhovka
09 September 2022
12:30
9
print version

The Head of the Department was informed about the accomplished work related to investigation of crimes committed by Ukrainian nationalists against the peace and security of mankind.

At present, the investigation of 80 criminal cases has been finalized, the files have been transferred to the competent authorities of Donbas (10 to the LPR, 70 to the DPR). Out of all finalized criminal cases, 66 were on the facts of homicide of at least 167 civilians and injuring 22 citizens, 14 - on the facts of destruction as a result of shelling of civilian infrastructure. 103 servicemen of the Armed Forces of Ukraine were brought to criminal responsibility, 21 of which were Officers, 10 Sergeants and 72 Privates. Also, five more criminal cases are ready for submission to the prosecutor's offices of the DPR and LPR on charges of ill-treatment of the civilian population of the Donetsk and Lugansk People's Republics. Investigation of more than 1,500 criminal cases continues.

Investigators of the Russian Investigative Committee continue evaluating the damage caused by the criminal actions of Ukrainian nationalists. To date, the production of about four thousand construction and technical appraisals for the inspected objects of Mariupol, Rubizhne and Severodonetsk has been finalized. According to experts, the cost of restoration work is more than 180 billion rubles.

In addition, inspection of the cities of Shchastye and Kirovsk was completed, and the cities of Stakhanov and Lisichansk were partially examined too. A package of documents is being formed for the appointment of appraisal construction and technical expertise. In the near future, with the participation of forensic investigators of the Russian Investigative Committee, it is planned to begin an inspection and subsequent assessment of the damage caused in the cities of Alchevsk, Pervomaisk, Krasny Luch and other settlements that were shelled by Ukrainian nationalists.

Today, in order to arrange an effective investigation of criminal cases on the crimes of the Kiev regime, military investigation units of the Russian Investigative Committee are formed on the territory of Kherson and Novaya Kakhovka. Investigators are working on criminal cases of shelling the Kakhovskaya hydroelectric power station, the Sokol plant and settlements. Criminal investigation established that the attacks were carried out by servicemen of the 27th rocket artillery brigade, 63 separate mechanized brigades, 59 separate motorized infantry brigade of the Armed Forces of Ukraine, deployed in Nikolayevskaya oblast.

In addition, the actions of certain citizens of Ukraine have not received proper criminal assessment. Such actions as when for money received from the SSU and MFU or due to ideological motives, individuals transferred the location coordinates of civilian infrastructures and residential buildings, which were subsequently shelled from the heavy artillery weapons and multiple launch rocket systems and caused death and injury of civilians and massive property destruction. Thus, the investigation of the criminal case against Mr. Postnikov “the spotter” has been recently finalized. In June 2022, he handed over the coordinates of the sports center and hotel buildings in Severodonetsk for a monetary reward of 9 thousand hryvnia (less than 18 thousand rubles). Those buildings became the targets of the attack by the Ukrainian nationalists.

Investigators are actively working with detained prisoners of war from the militant formations of Ukraine. Over the past month, 27 criminal cases have been launched against such individuals. The facts of their intentional killings of civilians have been reliably confirmed not only on the basis of the pro-Russian position of citizens, but also out of an effort to intimidate other people.

At the meeting, it was noted that investigators are working not only to examine criminal cases, but also to provide humanitarian assistance to the civilian population of Donbas and Ukraine, suffering from the criminal actions of Ukrainian nationalists.

After hearing the reports of his subordinates, the Chairman of the Investigative Committee noted the cynicism of the testimony of the detained members of the Militant Formations of Ukraine, their cruelty towards the civilian population, including children. He highlighted the need to take into account the testimony of doctors who assisted the victims in order to document in detail the specifics of the injuries received. The Head of the Department also stressed the importance of forming a legal framework regulating the organization of an international military tribunal in order to bring war criminals to justice. Mr. A.I. Bastrykin added that it is necessary to finalize the investigation of criminal cases against the highest Command Staff of the Ukrainian armed formations, who gave deliberately illegal orders to shell civilians and civilian infrastructure. Systematic documentation of the facts identified by the investigators of the Investigative Committee of Russia and collecting irrefutable evidence should become the basis for the subsequent objective judicial review of criminal cases.

In addition, Mr Bastrykin instructed to continue providing social activities, targeted aid to the civilians in the republics of Donbas and Ukraine, and assistance in resolving urgent issues. In the final part of the meeting, Mr. A.I. Bastrykin awarded Officers of various divisions of the Russian Investigative Committee with departmental medals, noting their conscientious service, high professionalism, valor and courage in carrying out their assignments. 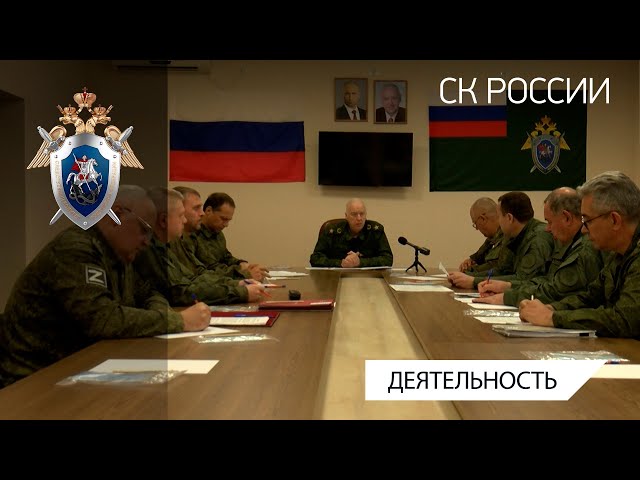