Terms of punishment for the defendants in the criminal case into the fire and death of people in the Zimnyaya Vishnya shopping center were announced
29 October 2021
08:38
1
print version

During the preliminary investigation, a team of more than one hundred investigators reconstructed the events of March 25, 2018 minute by minute, found out the reasons that led to dozens of victims, and gathered evidence to support the versions put forward by the investigation. The main purpose of the investigation was to identify all the persons involved, including those who contributed to the tragic consequences.

More than 450 people were recognized as victims in the criminal case and questioned, of whom 83 were relatives of those who died in the fire. A set of investigative experiments was conducted. In one of them, statists, technicians, expert psychologists, and sonographers were placed in a similar auditorium under similar conditions. Based on this experiment, the necessary expert studies were conducted to assess the level of viewers' perception of evacuation information.

More than 400 forensic, molecular-genetic, fire-technical and other examinations were carried out. Thus, within the framework of the legal examination, normative legal acts related to fire safety issues were investigated. Its conclusion made it possible to determine that legal relations in this area are regulated in detail. On this basis, in conjunction with other evidence, the investigation established specific flaws in the rescue operation by some firefighters, as well as the fact that the leadership of the regional Ministry of Emergency Situations did not conduct checks on compliance with fire safety and operation of the facility with a mass presence of people, and gave their actions a legal assessment.

As a result of a thorough analysis of all the circumstances of the incident, investigators identified the circle of persons whose wrong actions and incompetent decisions led to the death of people. Obviously, when conducting inspections and issuing documents confirming the compliance of the reconstructed building with construction rules and regulations, Gosstroinadzor officials have turned a blind eye to many things.

Antyushin was found guilty of committing a crime under Part 3 of Article 238 of the Criminal Code and sentenced to 8 years of imprisonment, to be served in a general regime penal colony, and to be deprived of the right to practice certain activities for a period of 2 years.

Genin and Bursin were found guilty of committing a crime under Part 3 of Article 293 of the Criminal Code. They were sentenced to five and six years of imprisonment, respectively. They are both deprived of the right to engage in certain activities for two years.

Having investigated these criminal cases, the Investigative Committee has brought to criminal responsibility all the individuals whose actions or inactions predetermined the tragedy in Zimnaya Vishnya, and are also causally linked to the consequences of this fire. 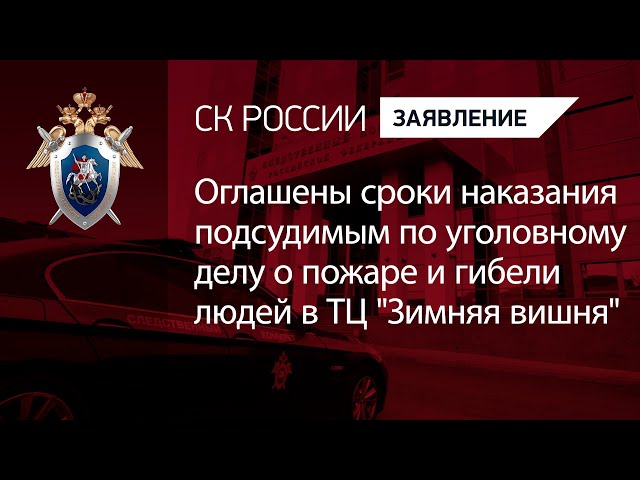