The Investigative Committee Is Engaged in Comprehensive Efforts to Establish the Circumstances of the Crimes of the Kiev Regime
21 May 2022
09:00
1
print version

The Investigative Committee of Russia continues major efforts to investigate the crimes of representatives of the Ukrainian Armed Forces in Donbass and to identify previously unknown facts of their illegal actions.

As part of the investigation of criminal cases initiated over ill-treatment of the civilian population and the use of prohibited means and methods in an armed conflict (Article 356 of the Criminal Code of the Russian Federation), two more Ukrainian servicemen – who, at different times, gave illegal orders to use artillery against civilian targets – have been identified.

On May 18-19, 2022, Oleksander Zuev, deputy commander of the 95th separate air assault brigade of the Armed Forces of Ukraine, and other Ukrainian servicemen gave and executed criminal orders for massive artillery and mortar shelling of Donetsk, Gorlovka, Yasinovataya and other towns of the DPR and LPR. Two people were killed and four others were injured as a result of these crimes. The shelling damaged 26 residential buildings and three infrastructure facilities.

Also during the investigation, the investigators of the IC of Russia have found that in the period from February 24 to March 3, 2022, Oleksander Derkach, the commander of the 2nd mechanized battalion of the 24th separate mechanized brigade of the Armed Forces of Ukraine, supervised mortar attacks on buildings and public places in Pervomaysk and the town of Molodezhnoye, which resulted in large-scale destruction. He and his accomplices pursued the goal of intimidating the local population and destabilizing the activities of the LPR authorities.

While checking the available information, investigators learned other facts of criminal deeds that have not yet received a formal legal assessment. It has been established that servicemen of the 36th Marine Brigade of the Armed Forces of Ukraine were involved in the shelling of Mariupol in the period from February 24 to April 17, 2022. Their actions led to the death of people and numerous destructions. In addition, servicemen of the Azov nationalist battalion destroyed a household in Mariupol using a combat tank in March of this year.

Criminal cases have also been initiated over the said facts. All the circumstances are being established and specific persons involved in these crimes are being identified. 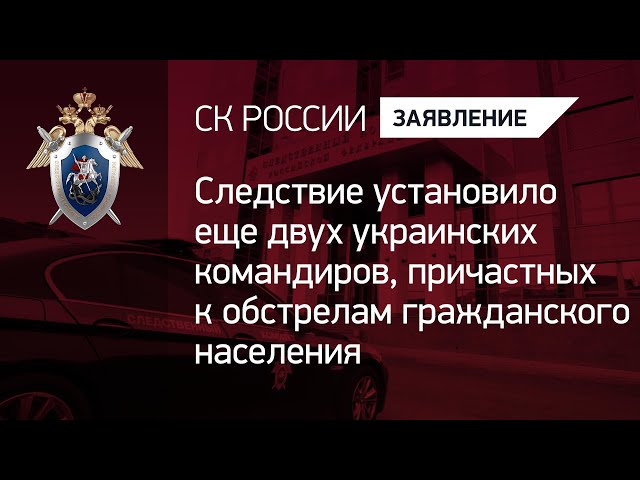