Three More Ukrainian Military Servicemen Involved in the Shelling of Civilians in Donbass Have Been Identified
23 May 2022
18:20
1
print version

The Investigative Committee of Russia has established the involvement of three more Ukrainian servicemen in crimes committed against the civilian population of Donbass. These are Pavlo Yurchuk, the commander of the 21st separate motorized infantry battalion of the 56th separate motorized infantry brigade of the Armed Forces of Ukraine, Igor Skibyuk, the chief of staff and the first deputy commander of the 95th separate airborne assault brigade, and his deputy Pavlo Turovchik. Investigators have initiated criminal cases against these and other Ukrainian military servicemen, whose involvement in similar crimes was previously established by the investigation; the cases have been initiated on the grounds of a crime under Part 1, Article 356 of the Criminal Code of the Russian Federation (ill-treatment of the civilian population, the use of prohibited means and methods in an armed conflict).

The shelling of Donetsk, Debaltsevo, Gorlovka, Yasinovataya, Ilovaisk, as well as the town of Sladkoe, killed eight civilians and injured 13 others, including two children, damaged 30 residential buildings, a kindergarten, a children’s clinic, a palace of culture. Artillery strikes by Ukrainian armed units in the towns of Pervomaysk, Zolotoe-5, Kirovsk, Rubezhnoye, Stakhanov killed two civilians, injured one civilian, damaged more than 30 buildings. A civilian who was wounded on May 11 died in the Stakhanov hospital.

The Investigative Committee of Russia continues to identify representatives of the armed units of Ukraine involved in crimes committed against civilians in order to prosecute them. 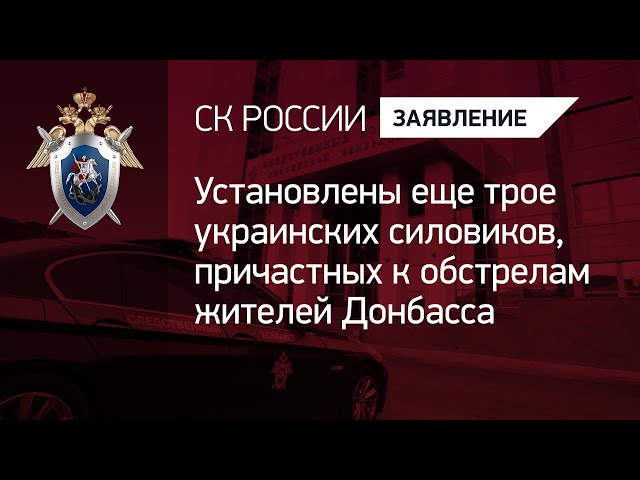